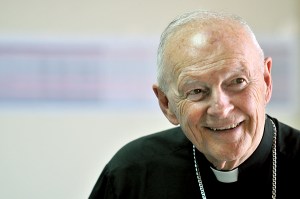 Deacon Robert Spencer is clearly outside of mainstream Catholicism, it’s a shame he is ordained at all. Recently, he unleashed his medieval hate on respected Catholic leader and theologian, Cardinal Theodore McCarrick.

What was Cardinal McCarrick’s offense according to Spencer? Simply speaking at an Anti-ISIS press conference organized by the Muslim Public Affairs Committee (MPAC) where he supported Muslim Americans against hate and reiterated his belief that Islam and it’s social message cherishes peace and compassion.

For this offense, the right-wing rag “The Daily Caller” headlined their article with the absurd title, “Catholic Cardinal McCarrick Embraces Islam.” Hyperbole much?

During his speech Cardinal McCarrick used the phrase “In the name of God, the Merciful and Compassionate.” He also said “Peace Be Upon Him,” after quoting Prophet Muhammad.

“Has Cardinal McCarrick converted to Islam?”

“‘Peace be upon him’ is a phrase Muslims utter after they say the name of [their reputed] prophet… [so] probably he is unaware of the unintended Islamic confession of faith he has just made,”said Spencer.

This is the sort of idiocy that we are facing from the Islamophobia Movement’s experts! Merely reciting a well known Islamic phrase positively makes a Catholic Cardinal a Muslim! I know Cardinal McCarrick is unphased by such idiotic mendacity but the fact that Spencer would resort to these gutter antics to feed his unhinged Far-Right, White Supremacist base is doubly egregious when one considers that the 84 year old Cardinal was recently rushed to the hospital with a heart problem.

Spencer sees the “threat” of Muslims and Islam everywhere, from Barack Obama to Cardinal McCarrick, the tent of Muslims-According-to-Spencer keeps on growing.