By Emperor on September 17, 2014 in Loon Violence, Loon at large 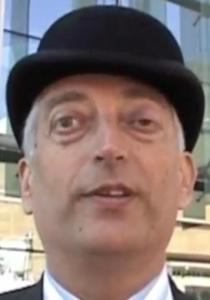 Britain’s Lord Christopher Monckton, 3rd Viscount Monckton of Brenchley, a politician and globe-trotting climate-change denier, has called upon the United States to outlaw certain parts of the Islamic holy book the Koran and to make reading them aloud illegal.

Right Wing Watch reported on Monckton’s latest column for conspiracy website and “Birther” hub World Net Daily, in which the former advisor to England’s former Prime Minister Margaret Thatcher urged the U.S. Congress to outlaw passages of the Koran as incitement to murder.

“Nearly all acts of terrorism perpetrated throughout the world in the past quarter of a century were carried out by Muslims in the name of Allah,” Monckton falsely claimed, omitting acts of terror by U.S. right-wing militia and the ongoing campaign of brutal violence being waged by Mexican drug cartels.

“Why?” Monckton asked. “One does not need to look any further than their “holy” book, the [Koran].”

“Craven public authorities have failed to act against the circulation of the [Koran] in its present form because they fear a violent backlash,” Monckton claimed. But, he said, anti-Islamists should not shrink from banning the portions of the Koran that call for violence against nonbelievers. The rights of free speech, he said, are outweighed by the need to stop incitement.

“A bill should be brought before Congress identifying all passages in the [Koran] which, whether in isolation or taken together, constitute incitement to murder,” Monckton proposed. He went on, “The bill should specify that anyone who reads any of these passages out loud is to be charged with that crime and, if convicted, subjected to the usual penalty for it – a long prison term.”

Censoring these passages of the Koran, he theorized, will neutralize the book’s radicalizing effects on young Muslims. “The prominent part played by the [Koran] in the radicalization of young Muslims so that they become willing to murder their own fellow-citizens demands that we act at once,” he said, “before its dangerous influence incites the loss of any more innocent lives. The [Koran] as it now stands is illegal.”

Monckton cited several passages of the Koran that he says call for the murder of nonbelievers, but failed to include the portions of the Christian Bible that call for the execution of homosexual men (Leviticus 20:13), the stoning death of adulterous women (Luke 16:18) and the killing of “sorceresses” (Exodus 22:17), blasphemers (Leviticus 24:10), and whole cities if they follow other religions (Deuteronomy 13:13-19).