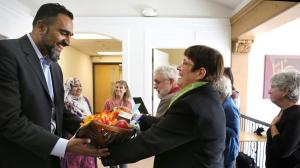 On Monday afternoon, Lori Lippitz and her little band of well-wishers pulled into the parking lot of the school they once thought of as theirs.

They came bearing gift baskets — fruit, flowers, nuts, pencils, rulers — and a card that said, “We wish for you and your children many years of love, learning and laughter in the home that is now yours.”

They also came with some trepidation.

How would it feel to walk back into their old Jewish school, which this August had reopened as a Muslim school?

What had happened to their prayer room?

Would the mosaic that told the biblical story of Genesis still be on the wall?

For 34 years, beginning in 1978, the old brick building on Gross Point Road in Skokie had housed Solomon Schechter Day School, which was as much a spiritual haven as a school.

“When it closed,” said Lippitz, whose daughter was a student there, “we felt that something important had ended in our lives.”

But demographics shape destinies, and as some of Skokie’s Jewish residents moved to other suburbs, the school’s enrollment declined. By 2012 what remained of the Skokie school had been consolidated into the Solomon Schechter Day School in Northbrook.

Opened in 1990 with 25 students and a curriculum that emphasizes Islamic studies, MCC had expanded to serve several hundred students. It had a long waiting list.

When the old Schechter school, owned by a Skokie school district, went up for sale at auction, MCC bought it. Now it’s MCC Academy for preschoolers to fifth-graders.

Shortly after news of the purchase got around, Lippitz, a singer who founded the popular Maxwell Street Klezmer Band, ran across an online comment from a Skokie resident responding to the change, a comment that struck her as “unwelcoming and a little xenophobic.”

“The person who put it there probably did not mean to do anything but express sadness at the loss of a Jewish institution,” she said.

Who knew, especially given the latest violence in the Middle East, what kind of hostility the school’s new inhabitants might encounter?

“Times of social anxiety and distress are precisely the times when one has to make a point to be seen as welcoming,” she said.