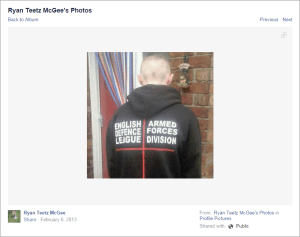 A serving soldier from Manchester charged with a terror offence has admitted making a nail bomb.

Ryan McGee, 19, was serving with the 5th Battalion The Rifles when he was detained in December at an Army base in Germany after the discovery of a suspicious device at a Salford house.

He also admitted a separate charge at the Old Bailey of possessing a copy of The Anarchist Cookbook on bombs.

McGee, of Mellor Street, Eccles, was bailed ahead of sentencing in November.

The Anarchist Cookbook includes instructions for the manufacture of explosives as well as for home-manufacturing of drugs.

McGee admitted possession of information likely to be useful to a person committing or preparing an act of terror and making explosives contrary to the Explosives Substance Act by making an Improvised Explosive Device.