By Emperor on October 16, 2014 in Loon Politics, Loon Violence, Loon-at-large 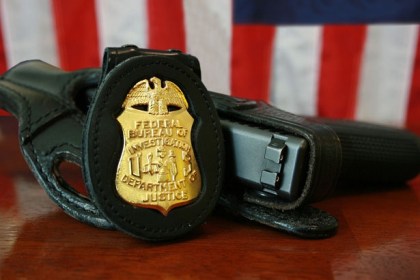 An absolutely devastating, must read:

By Arun Kundnani, The Nation

On the night of December 9, 2011, Siham Stewart called her husband, Ayyub Abdul-Alim, as he closed down his corner store, Nature’s Garden, in Springfield, Massachusetts. She asked him to bring home a gallon of milk. A few minutes later, she watched from the window of their second-floor apartment as he was seized in the street and handcuffed by two police officers.

Forty-eight hours after Abdul-Alim’s arrest, FBI agent James Hisgen and Springfield police officer Ronald Sheehan offered him the chance to walk away free of charges if he agreed to become an informant on the Muslim community. He refused the deal and is now held at the Cedar Junction maximum-security prison in Massachusetts, facing up to sixteen years behind bars.

While awaiting trial, Abdul-Alim discovered that his wife received cash payments from the FBI totaling at least $11,949. The receipts were signed by Sheehan and Hisgen. Stewart testified against Abdul-Alim in court and admitted to working as an informant. This past April, Abdul-Alim was found guilty of illegal possession of a firearm that he alleges the officers planted on him as part of their attempt to pressure him to work for the FBI.

Abdul-Alim, 36, grew up in New York City in a family of African-American and Puerto Rican heritage. Prior to his arrest, he founded and ran the Quran and Sunnah Community Center in Springfield, which offered free meals and prayer services, and Connections Transportation, which transported people to visit their loved ones in prison. He was also a small business owner, an apartment complex manager, a husband, and a father figure to Stewart’s son.

His life began to change in 2010 after he returned from a three-week religious trip to Mecca. Abdul-Alim reports that he began to receive calls from James Hisgen, an agent at the FBI’s Springfield field office, who asked him questions such as, “Do you love America?” and told him to call back if he was interested in working as an informant.

In early 2011, Hisgen showed up at Abdul-Alim’s mosque, Masjid Al Tawheed, with two other agents. According to the Imam, Dr. Ishmael Ali, Hisgen claimed he was from the Springfield Building Department and demanded to search the mosque. Dr. Ali turned him away because he did not have a warrant. Dr. Ali recalled that in the two years leading up to his arrest, Abdul-Alim continually sought advice on how to get the FBI agents to leave him alone.

Since 9/11, a key element in the FBI’s counter-terrorism tactics has been the aggressive recruitment and deployment of large numbers of informants among Muslim communities in the United States. Part of the purpose is to gather information on political or community activism, which the FBI frames as a precursor to extremist violence. But the tactics also fit a familiar pattern—one that harkens back to the FBI’s history of targeting the civil rights and Black Power movements of the 1960s, when it was likewise asserted that extremist ideologues were fueling violence.

At that time, FBI agents were each expected to hire at least one informant to report on the goings-on of black people. African-Americans were watched by FBI informants everywhere they congregated: churches, bookstores, bars, restaurants, college classrooms and other gathering spots. In addition to providing information on activist leaders, the informants served as “listening posts” for blanket information on black communities.

The FBI believed that the civil rights movement was a front for Communist subversion and that the urban rebellions of black youth were instigated by Communist agitators. Systematic spying, it was thought, would help prevent riots but ultimately the purpose was to disable the growing radicalism of black America. Black Muslims—branded the “extremists” of the day—were seen as especially politicized, and prominent community figures such as Muhammad Ali and Malcolm X were placed on NSA and FBI watch lists. Nation of Islam leader Elijah Muhammad had been on the FBI’s radar since World War II; in 1942, agents had arrested him on charges of draft evasion.

The best-known FBI initiative directed at the black liberation movement was COINTELPRO—short for Counterintelligence Program. It was launched in 1956 to infiltrate the Communist Party but shortly afterwards was expanded to include the ongoing surveillance of black activists. Disinformation campaigns, arrests on trumped-up charges, faked evidence, and assassinations were used to “expose, disrupt, misdirect, discredit, or otherwise neutralize” black movements, according to the FBI’s own documents. But COINTELPRO was just one initiative within the FBI’s wider surveillance and criminalization of black organizations.

Abdul-Alim’s parents were themselves caught up in these longer histories of FBI surveillance. His father was active with the Black Panther Party in New York and his mother was a member of the Young Lords, the radical Puerto Rican youth group that was, like the Panthers, targeted by the FBI. Both parents were involved in the Mosque of the Islamic Brotherhood, a Harlem-based Muslim congregation founded by an associate of Malcolm X and whose attendees have faced decades of surveillance.