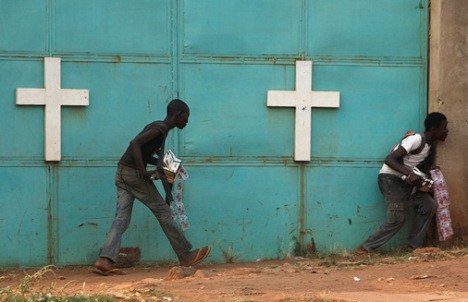 People hide from gunfire near a church during a Feb. 18 firefight between African peacekeepers and fighters from the anti-balaka militia in Bangui, Central African Republic. CNS photo

This is the second article in a Loonwatch exclusive series entitled, This is Africa. The first article set the stage for understanding the scramble for Africa’s abundant resources, and is recommended as a prerequisite: Bleeding Africa: A Half Century of the Françafrique.

The Central African Republic (CAR) has fallen from the headlines, but what is happening there must not be forgotten. Beyond sensationalism, sound bites, and reflexive, self-serving narratives, what really happened and why does it matter?

It matters because the people have suffered and because they continue to suffer. It matters because the same macabre scenarios keep playing out, again and again. In CAR, Nigeria, Libya, Palestine, Syria, Iraq, and beyond. Each conflict has a particular context, distinct from the others, but we are often led to believe they all intersect with Islam.

As violence raged across CAR, most of the major media focused myopically on the religious angle. We were told rebels known as the Seleka, comprised exclusively of Muslims, launched a blood-soaked campaign in March of last year and deposed the country’s Christian president, viciously attacking innocent Christian civilians in the process. After months of violence and unprovoked attacks, we were told, Christian militias formed to defend themselves against further attacks by Muslims. Violence subsequently spiraled out of control, leading to gruesome scenes of innocent people, including children, being slaughtered in the streets.

Violence reached unprecedented levels in December of last year. By March of this year, the UN reported most Muslims had been “cleansed” from the Western part of the country. The Muslims, according to this narrative, essentially brought about their own demise. Sure, it was the extremists who started it all, but isn’t it always the Muslims, striking out “in the name of Islam”?

What does it mean when people claim violence is done “in the name of Islam”? This accusation relies on assumptions that are rarely challenged. It seems we’re so conditioned to simply accept that religion in general, and Islam in particular, are the root cause of violence all over the world, most people have stopped asking critical questions.

Religion causes violence, and especially the religion of Islam. Everyone “knows” that. But is it true?

The real story behind the headlines is far more complex, and includes parties barely mentioned in the dominant narrative. Foreign countries, most notably France, played a significant role in the conflict as well, and not just as a peacekeeping force. The missing pieces shape the narrative with the contours of nuance, and prompt the questions that are rarely asked, even by journalists.

Why did the Muslims of CAR suddenly launch a civil war in the Central African Republic? What did they stand to gain? Why is it so easy for so many people to believe that Muslims, Africans, and especially African Muslims, spontaneously indulge in bloodletting for no apparent reason? We are told the Muslim minority started kicking up dust and perhaps lopping off heads, just as we’ve come to expect.

For many, this curious narrative seems to spark no curiosity. We can simply assume the much-vaunted “free media” will tell us the unvarnished truth. Except that they often don’t, as well shall see.

We know there are Christians and Muslims in CAR because, collectively, these groups are the stars of the show. The protagonist and the antagonist in the drama that unfolded, reaching a tragic climax with the blood of the innocent.

Pitting Christians and Muslims against one another makes good headlines in the current climate. Blaming religion for all the world’s problems is popular among the elites and broad swaths among the masses as well, and within that context, Muslims have taken center stage. The Muslims are allegedly always picking on Jews and Christians, and even Hindus, Yazidis and atheists. All non-Muslims are supposedly fair game. But for the West, it is the Christian victims who tug hardest at the heart strings. Christianity may be barely relevant in the West, but the hollowed out tradition still resonates when “jihad” is on the march.

The problem with the this Christian-Muslim binary is that it’s false.

The religious composition of CAR is more complex than a Christian majority and a Muslim minority. According to the CIA World Fact book, the religious breakdown in CAR is 35% indigenous beliefs, 50% Christian (25% Protestant, 25% Catholic), and 15% Muslim. An annotation explains “animistic beliefs and practices strongly influence the Christian majority.” At best, Christians comprise a small majority, heavily influenced by animist beliefs, while more than a third are animists outright.

Animists? You can be forgiven for not having the slightest notion what an animist is, even if you were absorbed daily in the news of CAR. Animists complicate the narrative. Animists don’t tug at heart strings. Animists are not part of the agenda, and so they mostly disappeared. Human rights matter mostly as props that distract us from the major plot, and for that role, animists don’t make the cut when the local Christians will do nicely.

Despite the glaring omission of animists from the lurid tales of bloodshed, there are some obvious clues suggesting the influence of their beliefs. Cannibalism is not a Christian practice, yet we have seen several gruesome examples of “Christians” killing and eating their Muslim victims, a phenomenon also seen in Nigeria. Ouandja Magloire stands out in a crowd for his stunning barbarism. A mob of angry Christians murdered a Muslim passerby and desecrated his corpse. Among the perpetrators was “Mad Dog” Magloire, who ate the victim’s leg, and then saved a portion of the flesh for later, as if parts of the corpse were restaurant leftovers.

Magloire reported he put the leftover flesh of his victim between two halves of a baguette and ate it, with a side of okra. Mad Dog Magloire would have been a public relations bonanza for the hate brigades, if only  he had been a Muslim. Months ago, when a Syrian rebel bit into the heart of his victim, we saw headlines like this: Syrian Jihadist Eats Human Flesh In The Name Of Allah.

In the name of Allah? Where are the headlines accusing Mad Dog Magloire of feasting on a leg sandwich “in the name of Jesus”? In fact, neither Christianity nor Islam sanction cannibalism.

Ritual cannibalism is found in some streams of animism, where eating a part of a defeated enemy’s body is thought to pass the dead person’s spirit to the conqueror. This peculiar detail is largely ignored by the Western media, which does not bother to delve into why these nominal animist-influenced “Christians” have indulged in this horrifying spectacle on more than one occasion.

One thing the major media are clear on is who started the conflict in CAR. “The Muslims” are to blame, and any violence that has come in response is their own fault. Sure, we concede, some of the Muslim victims are not personally responsible, but collectively, the implication is the Muslims had it coming.

But who are “the Muslims” in this scenario?

The Seleka rebels are not a homogeneous group of local Muslims who have suddenly erupted into random violence “in the name of Islam.” In fact, foreign mercenaries under the Seleka umbrella, largely from neighboring Chad and Sudan, have flooded the country, joining dissident factions of rebel groups that have banded together as Seleka. An estimated 1000-2000 armed mercenaries streamed into CAR. According to some reports, the ranks of the Seleka rebels swelled to as many as 25,000.  To put the relative strength of that force in perspective, consider the country’s entire army is comprised of only about 3,500 soldiers.

The Seleka do include some locals, not all of whom are Muslims. Some are non-religious rebels, thugs, and opportunists who have joined widespread looting and vandalism during the latest round of unrest. While there have been atrocities that appear to be religiously motivated, some of the rebels are clearly driven by non-religious motives, and have on occasion attacked Muslim communities as well. Multinational Force of Central Africa (FOMAC) troops that operated outside Bangui confirmed to Human Rights Watch that Seleka fighters in their zones were majority Chadian or Sudanese.

Despite being almost the size of France, CAR is a sparsely populated country of only 4.5 million people. Porous borders and weak state authority leave the country vulnerable to infiltrators from neighboring countries, including Chad, the Democratic Republic of the Congo, and Sudan. Marauding foreign intruders often raid local villages, poach wildlife, and sometimes join local bandits known as “zaraguinas” for concerted crime sprees.

We are expected to believe criminal thugs and mercenaries are not motivated by self interest, but rather by religion. Paid mercenaries, we are to assume, are working “in the name of Islam” rather than following the orders of their paymasters in Chad, the Sudan, and elsewhere. In other words, we are being asked to set common sense aside and reflexively blame the local Muslims in particular and Islam in general for all of the unrest we see in the news.

Yet both Muslims and Christians in CAR have acknowledged historical co-existence between religious communities, and pointed to political factors as the driving force behind the conflict:

In the country’s capital city of Bangui, local Muslims expressed similar sentiments regarding the relatively peaceful relations between Muslims and Christians prior to descent into civil war:

“It’s not a conflict between Muslims and Christians. We are one nation,” said Ahmet Adam, son of the local imam.

“Here, we [in Bangui] have a mixture of populations that do not exist in other areas,” said Bash, a 28-year-old Muslim resident. “This diversity has prevented us from sinking into violence. We grew up together, people have intermarried. Here, you can find a child with a Muslim name in a Christian home because the father is Muslim.”

“Religious communities that have always lived together in perfect harmony are now massacring each other. The situation must be stopped as soon as possible.” ~ CAR Interim Prime Minister Nicolas Tiangaye

If religious communities in CAR have always “lived together in perfect harmony,” what has changed? What is the catalyst for this apparent spontaneous eruption of “religiously-motivated” violence? In a rare departure from the dominant narrative of a Muslim-led holy war, the Christian Science monitor concluded:

“This is neither jihad nor crusade. Fighting in the CAR is over political power, with the capitol city Bangui as the prize.” ~ Chaos in Central African Republic is about power, Christian Science Monitor

If the fighting is really about political power, then why is it so often portrayed as a holy war? Who is jockeying for political power in the Central African Republic and why? Political power is merely vehicle to the real prize: Africa’s abundant natural resources. As we discussed in the first article in this series, competition is emerging at a time when the Western imperial powers are poised to to sink their teeth deeper into the fat of African riches.