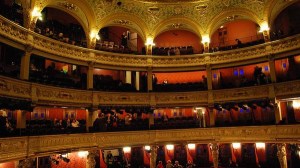 France’s government is drawing up a new set of rules for theatres after Paris Opera ejected woman for wearing a veil during a performance, the institution’s deputy director said Sunday.

The incident took place when a veiled woman was spotted on the front row of a performance of La Traviata at the Opera Bastille, Jean-Philippe Thiellay told AFP, confirming a media report.

France brought in a law in 2011 banning anyone from wearing clothing that conceals the face in a public space, or face a 150 euro ($190) fine.

The woman was sitting just behind the conductor, visible to monitors, wearing a scarf covering her hair and a veil over her mouth and nose during the performance on October 3.

“I was alerted in the second act,” said Thiellay, adding that “some performers said they did not want to sing” if something was not done.

France’s ministry of culture said a bill was currently being drafted to remind theatres, museums and other public institutions under its supervision of the rules regarding veils.

The spectator and her companion — tourists from the Gulf, according to MetroNews — were asked to leave by an inspector during the interval.

“He told her that in France there is a ban of this nature, asked her to either uncover her face or leave the room. The man asked the woman to get up, they left,” Thiellay said.

“It’s never nice to ask someone to leave… But there was a misunderstanding of the law and the lady either had to respect it or leave,” he said.