By Emperor on November 6, 2014 in Loon Politics 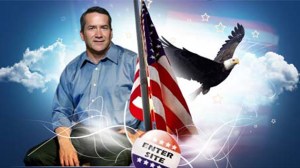 Republican Jody Hice romped home in a safe rural Georgia congressional district last night. The congressman-elect is on the record saying that Islam is not a religion that deserves the protection of the First Amendment. He also has warned that Satan is infiltrating society and that there is a gay blueprint to dominate America via sodomizing “your sons.”

Yet Hice does have some surprisingly progressive views, such as his belief that women should be allowed to run for office. This is provided that they get permission from their husbands first.