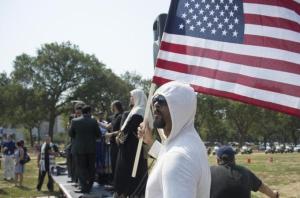 By Khaled A Beydoun

The United Arab Emirates designated two Muslim-American civil rights groups – the Council on American-Islamic Relations (CAIR) and the Muslim American Society – among the 83 institutions included in its new terrorist group list. The designations were announced on the state’s official news agency on November 15, marking a nefarious precedent where a government of a Muslim-majority state has designated a Muslim-American institution as a “terrorist organisation”.

While the classification of both organisations as terrorist groups is alarming, the allegation against CAIR is particularly concerning. The advocacy organisation based out of Washington, DC, which encompasses 28 chapters across the United States, has stood as a vital and vocal opponent of state-sponsored discrimination against Muslim-Americans. In addition, CAIR – principally through its chapters – has carried forward unapologetic initiatives aimed at eroding Islamophobia and defending Muslim-American individuals and institutions during the post-9/11 era.

Regional politics, not CAIR’s work stateside, moved the UAE to designate the civil rights organisation a terrorist group. More specifically, hearsay tying CAIR with the Muslim Brotherhood, a political nemesis of the UAE, is believed to be the principal catalyst behind the designation.

Although distant geopolitical concerns are behind the UAE designating CAIR as a terrorist organisation, what impact will the classification have on the advocacy group, its civil rights mission, and collaterally, Muslim-Americans at large? The ramifications are not only acute, but also extensive.

Centuries old stereotypes, still embedded in the American imagination, conflate Muslims – regardless of their nationality or locale – as one and the same. Therefore, Muslim Americans – the overwhelming majority of whom have no connection to the UAE – are consistently lumped up with the prevailing stereotypes attributed to the people of the oil-rich state: endless wealth, modern slavery, and conspicuous expression of religious conservativism cloaking commercial insatiability.

The recent designation of CAIR as a terrorist organisation not only provides further evidence that Muslims are anything but a monolith, but also manifests a widening political and interests’ gulf between Muslims in the UAE and Muslim-Americans.

Since 9/11, the UAE has expressed only passing concern for the civil liberties crackdown experienced by Muslim-Americans. This apathy may be a surprise to everyone in the US aside from Muslim-Americans, who can point to the dehumanisation of Muslim migrant workers within the Gulf region to highlight how religious affinity is seldom a source of apathy.

With heightening state and societal animosity toward Islam in the US, particularly with the recent emergence of ISIL, the UAE’s designation of CAIR as “terrorists” shifts their state stance from apathy toward full-fledged assault. The designation has two considerable effects: first, it endorses specific allegations from right-wing US groups that CAIR colludes with terrorist networks; and second, functions as testimony, from a native state informant, deepening the stereotype that critical Muslim-American civil rights organisations are subversive and anti-American.

CAIR is not designated a terrorist group within the US. However, the organisation and its leadership have fended off allegations of direct or indirect links with state-designated terrorist groups for many years. The allegations, although legally tenuous, curried public perception that CAIR itself had terrorist affiliations. This led to increased government surveillance of its Executive Director, Nihad Awad, FBI probing of CAIR chapters and community outreach work, monitoring of Muslim-Americans seeking their counsel, and intensified slander from right-wing political leaders and media pundits.

By classifying CAIR as a terrorist organisation, among the likes of ISIL, al-Qaeda, and Boko Haram, the move will embolden Islamophobic elements to pronounce their hateful rhetoric, and expedite draconian policies against Muslim-Americans.

Hussam Ayloush, Executive Director of CAIR’s Greater Los Angeles chapter, echoes that the designation will “fuel Islamophobia, and undermine the safety and well being of Muslim communities [in the United States] around the world”.

Furthermore, the UAE designation will further complicate CAIR’s ability to carry forward advocacy work protecting Muslim-Americans. Instead of marshaling manpower and resources to handling hate crimes cases, public workshops, and other direly needed initiatives, the designation will compel the organisation and its staff to respond to its placement on the terrorist list, and collaterally, deal with the barrage of political and private hate that is sure to follow.