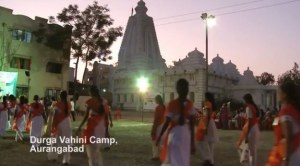 Hindutva, or Hindu Nationalism, which combines a fundamentalist understanding of Hinduism with Indian nationalism has been on the ascendancy for decades, culminating in the presidential victory of the fascist Narendra Modi.

Hindutva organizations are highly organized, they are also opponents of Hindus converting to either Christianity or Islam. They have spearheaded anti-conversion legislation in numerous states that prevent or make near impossible the conversion of a Hindu to another religion; often justifying it as a necessary measure to counteract the use of material incentives by missionaries.  However, they have no compunction themselves in aggressively offering monetary incentives to Muslims and Christians to convert to Hinduism in highly publicized ‘reconversion ceremonies.’

For years now Hindutva groups, such as the Sangh Parivar have been holding training camps for youth where they are indoctrinated in an ideology that has as its central doctrine the subjugation and elimination of non-Hindu religions.

The following video highlights the dehumanizing and violent indoctrination that Hindtuva groups are leaving on the impressionable minds of India’s young girls (h/t: Abu ‘Alimah).

Girls in the video can be seen speaking of their supremacist beliefs, their love and desire for fighting and killing non-Hindus. This sort of mentality has already caused significant damage in the past to relations between India’s various religious and ethnic groups and it promises to perpetuate hate and violence.:

–Pamela Geller and Robert Spencer: Wipe Pakistan Off The Map