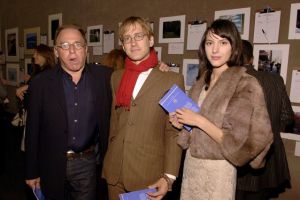 Then-owner of The New Republic Marty Peretz, at left, in 2005 Jemal Countess/WireImage

So there were ‘Mass resignations’ at The New Republic  (TNR) following the resignations of editors Franklin Foer and Leon Wieseltier, over the direction the current owner Chris Hughes was taking the magazine. But where were these great principles when Marty Peretz former owner was using his position at TNR for his anti-Black, anti-Latino, anti-Arab, Islamophobic rants?

The New Republic and the Beltway media’s race problem

There’s little doubt that The New Republic’s young owner, Chris Hughes, treated its beloved editor, Frank Foer, poorly. Hughes’ new CEO, Guy Vidra, criticized Foer’s leadership while sitting right next to him at an all-staff meeting. Hughes hired a replacement before firing Foer — which Foer had to learn about through rumors. Hughes, a newcomer to journalism who bought his way, publicly humiliated Foer, along with also-fired literary editor Leon Wieseltier. It’s an ugly, unkind way to treat an editor, an employee, and the well-respected leader of a newsroom. Much of the publication’s masthead, outraged, has resigned in solidarity and protest.

But Hughes’ predecessor, Marty Peretz, did much worse. In the years of Peretz’s ownership, from 1974 to 2007 and then partially until 2012, he gave himself the title of editor-in-chief and regular space in the magazine and on its website, which he frequently used to issue rants that were breathtaking in their overt racism. The columns typically came during periods of turmoil for the minorities he targeted: often blacks and Latinos, later focusing especially on Muslims and Arabs.

The overwhelmingly white writers and editors who worked for Peretz knew his work was monstrous, and often struggled over the morality of accepting his money (as did I, during my brief internship there). But none ever resigned en masse as they did over the firing of two white male editors today. That fact is just a particularly egregious example of a much larger problem among the elite Beltway publications: a lack of diversity and a begrudging tolerance of racism that go hand-in-hand.

Here are the sorts of things that Peretz wrote or said over the years; all but the speeches here ran on the New Republic’s pages or website.

Quoted speaking on the “cultural deficiencies” of “the black population”:

Citing statistics on out-of-wedlock births among blacks, Martin Peretz, editor in chief of The New Republic, said, “So many in the black population are afflicted by cultural deficiencies.” Asked what he meant, Peretz responded, “I would guess that in the ghetto a lot of mothers don’t appreciate the importance of schooling.” Mfume challenged Peretz, saying, “You can’t really believe that. Every mother wants the best for their children.” Peretz agreed, then added, “But a mother who is on crack is in no position to help her children get through school.” Some in the audience of 2,600 young Jewish leaders hissed at Peretz’s remarks.

Writing on the “lives of Africans”:

The truth is that no one has ever really cared about the lives of Africans in Africa unless those lives are taken out by whites. No one has cared, not even African Americans like [Jesse] Jackson and [Susan] Rice. Frankly — I have not a scintilla of evidence for this but I do have my instincts and my grasp of his corruptibility — I suspect that Jackson was let in on the diamond trade or some other smarmy commerce.

Writing on the “deficiencies” of “Latin society”:

Well, I am extremely pessimistic about Mexican-American relations, not because the U.S. had done anything specifically wrong to our southern neighbor but because a (now not quite so) wealthy country has as its abutter a Latin society with all of its characteristic deficiencies: congenital corruption, authoritarian government, anarchic politics, near-tropical work habits, stifling social mores, Catholic dogma with the usual unacknowledged compromises, an anarchic counter-culture and increasingly violent modes of conflict.

By far his worst screeds, though, were reserved for Muslims and Arabs, whom he famously argued should all be stripped of free speech rights:

But, frankly, Muslim life is cheap, most notably to Muslims. And among those Muslims led by the Imaam Rauf there is hardly one who has raised a fuss about the routine and random bloodshed that defines their brotherhood. So, yes, I wonder whether I need honor these people and pretend that they are worthy of the privileges of the First Amendment which I have in my gut the sense that they will abuse.

On the “higher standards of civilization” that “we” (that most telling pronoun) hold than do Muslims:

I actually believe that Arabs are feigning outrage when they protest what they call American (or Israeli) “atrocities.” They are not shocked at all by what in truth must seem to them not atrocious at all. It is routine in their cultures. That comparison shouldn’t comfort us as Americans. We have higher standards of civilization than they do. But the mutilation of bodies and beheadings of people picked up at random in Iraq does not scandalize the people of Iraq unless victims are believers in their own sect or members of their own clan. And the truth is that we are less and less shocked by the mass death-happenings in the world of Islam. Yes, that’s the bitter truth. Frankly, even I–cynic that I am–was shocked in the beginning by the sectarian bloodshed in Iraq. But I am no longer surprised. And neither are you.

And no one resigned — including me, while I was an intern at the magazine for four months. Though I was unpaid, I eagerly accepted the resume-boosting prestige that came from working there. And, like the rest of the staff, I did it knowing it meant turning a blind eye to Peretz’s frequent screeds on the magazine’s website, fully aware that they were not just the crazy rants of an old racist but were in fact palpably damaging to the minority families who had to live in a society that was that much more intolerant because Peretz enjoyed a platform that legitimized his views.