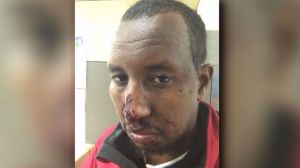 SEATTLE – Officers arrested a 26-year-old man early Sunday after he called a taxi driver a “terrorist” and beat him unconscious, causing the cab to drift out of control and strike several parked cars before slamming into an apartment building in Seattle’s Magnolia neighborhood, police said. Investigators labeled the attack a “hate crime.”

Adam Gaal, the 34-year-old cab driver, told police the incident began when he picked up three men and a woman in Belltown just before 2 a.m. Sunday and drove them to the 4200 block of 27th Avenue West.

The suspect then gave Gaal his credit card to pay for the trip and apparently became angry at how long the transaction was taking, said Andrew Garber of the Seattle police.

“He says, ‘You know where you are? You’re in America, this is not where you come from. You are an immigrant this is not your country. You are terrorist. You are ISIS,” Gaal said.

The passenger, later identified as Jesse Fleming, then leaned across the seat and repeatedly punched Gaal in the face, Garber said.

Gaal lost consciousness and his foot slipped off the brake, causing the cab to roll downhill, strike several cars and eventually come to a stop after crashing into the stairs of an apartment building.

“He just jump on me and punching me, beating me, punching me and I become unconscious,” Gaal said.