By Garibaldi on December 27, 2014 in Anti-Loons, Loon Violence 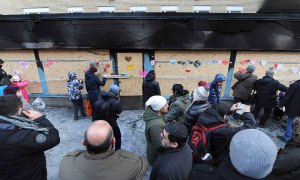 Several hundred marchers turned out in Sweden on Friday to denounce an arson attack on a mosque that injured five people Thursday, as the traditionally tolerant country confronts the rising influence of the extreme right.

A firebomb was thrown through a closed window of the mosque in the central city of Eskilstuna on Thursday, injuring five of the nearly 70 worshippers inside — two of whom remained hospitalised Friday.

Answering calls to denounce the attack by the “Together for Eskilstuna” Facebook page, a large group of people converged on the damaged mosque to show their support.

According to police, windows in a second Eskilstuna mosque were broken overnight Thursday, though authorities couldn’t say whether the two attacks were linked.

“We will never tolerate this kind of crime. Those who want to practice their religion should have the right to do so,” Lofven told public radio station SR.

No suspects had been arrested Friday afternoon in the case police have opened for aggravated criminal arson, which has been joined by Sweden’s intelligence service, Sapo.