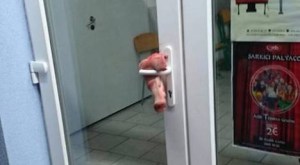 I don’t know about it being an “affront to Muslim sensibilities,” most Muslims while likely being disgusted by this act and seeing how uncivilized and hatefilled it is likely find the perpetrators pitiful and ignorant.

In a barbaric affront to Muslim sensibilities, part of a pig’s head and some pork tripe was attached to the door of a mosque in Vienna’s 21st district on Christmas day.

The imam of the Kocatepe mosque spoke to the Andadolu press agency about the incident, condemning the vandalism as an “unacceptable” act.

The head of the Turkish-Islamist Union in Vienna (ATIB), Fatih Karadaş, condemned the attack saying that “this is not an attack against Muslims but the whole of humanity. We, as Muslims, will preserve our calm and collective attitude.”

This is not the first incident of its type, as Austria’s Muslim community has been attacked several times this year in similar hate crimes. An Imam Hatip school in Vienna that concentrates on religious education was also vandalized. A pig’s head was left in front of the school’s door during Ramadan in early October.

And in August, a pig’s head was impaled on a fence at a construction site for a new islamic school.  It’s not known who left the pig’s head at the centre, but even if someone confesses there is little the police can do as nothing was damaged and therefore there are no criminal charges.

The Islamic Federation could make a complaint within civil jurisdiction. Muslims are forbidden from eating pork or touching pig carcasses, as they are considered unclean.

The planned school has been unpopular in Austria, with Foreign and Integration Minister Sebastian Kurz saying the idea “is completely the wrong approach”.

Another mosque called Eyüp Sultan, located in the town of Telfs, was repeatedly vandalized with graffiti.

In one of the more serious incidents, an elderly Muslim woman was attacked in a bank, apparently the victim of a hate crime motivated by religious intolerance.

In September, a Muslim woman was attacked by another woman on a train, apparently because the former was wearing a headscarf.

In August two elderly Muslim ladies wearing headscarves were attacked in Favoritenstraße. Police were reportedly slow to respond to this incident, and only began questioning suspects days after.

Austria’s Islamic Religious Community Association said that Muslims often experience discrimination in Austria but that “it is not well documented”.

Spokeswoman Carla Amina Baghajati said that the association plans to start collecting data on all religiously motivated incidents. However, she said she did not believe that the police lacked sensitivity to the issue.