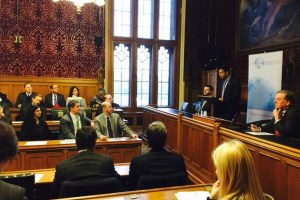 Gov. Bobby Jindal’s whole career path has been predicated on how much he can suck up to the racist White establishment/privilege elements of the GOP. He is, as Hamid Dabashi notes about the neo-colonized, a Brown guy with a White mask on; for the GOP he’s the token Brown politico.

This point was made by Arsalan Iftikhar who called out Jindal for championing the laughable and debunked conspiracy theory perpetuated by Islamophobes about “No-Go Zones.”

Not surprisingly, Jindal gave his anti-Muslim speech at the British Neoconservative think tank founded by Douglas Murray, The Henry Jackson Society, a hotbed of Islamophobia. When Jindal was pressed to name any so-called “No-Go Zones,” he deflected (blaming the “radical Left”), highlighting not only that this is a subject he is ill-prepared to discuss but that these are talking points fed to him by the likes of now discredited “Fox News terrorism experts” such as Steven Emerson.

For calling Jindal out and not apologizing for his remarks, (Iftikhar said he’d only “apologize to Bobby Jindal when he apologizes to seven million American Muslims for advancing the debunked ‘Muslim no-go zones’ myth”) Iftikhar has been banned by MSNBC.

What will the consequences for Gov. Jindal be, especially considering he has not retracted his ridiculous comments but instead has chosen to double down?