By Dorado on January 26, 2015 in Loon People, Loon Politics, Loon-at-large 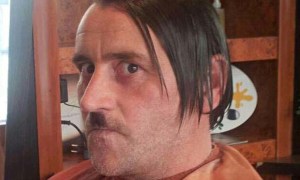 From earlier in the week…this one was a doozy and somehow so unsurprising.

Anti-Islamization leader steps down amid uproar over Hitler selfie

As thousands-strong anti-Islamization rallies make headlines in Germany following the Charlie Hebdo attack, one of the rallies’ organizers has resigned as leader of a right-wing group after a newspaper published a months-old selfie of him posing as Adolf Hitler.

The photo shows Lutz Bachmann, leader of PEGIDA, which translates in English to Patriotic Europeans Against the Islamization of the West. It appeared Wednesday on the cover of German tabloid BILD.

Bachmann resigned as chairman of the group following the backlash to the Hitler photo, as well as another image Bachmann posted of a man in a Ku Klux Klan robe with the caption, “Three K’s a day keeps the minorities away.”

“I apologize to everybody who has felt attacked by my online postings. They were comments made without serious reflection, which I would no longer express today. I am sorry that I thereby damaged the interests of our movement, and draw the appropriate conclusion,” Bachmann said in Dresden. 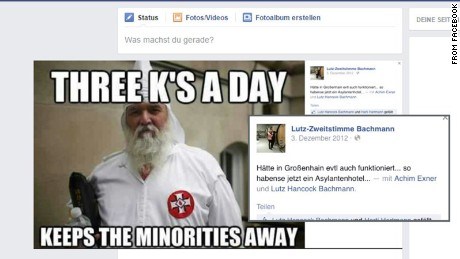 Bachmann also posted a photo of a Ku Klux Klansman.

The selfie was an act of satire, his spokeswoman Kathrin Oertel said on Facebook. While every citizen has the right to engage in satire, she wrote, insulting foreigners is not satirical.

Though Bachmann apparently has deleted his own Facebook account, screen grabs published by numerous media outlets suggest Bachmann posted the Hitler photo in September, while the KKK image is from 2012.

Bachmann told BILD, “I took the photo at the hairdressers, for the publication of the audiobook of the satire ‘He’s Back.’ … You need to be able to joke about things now and then.”