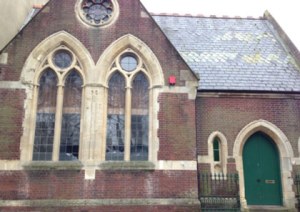 NORWICH – A mosque in Norwich city in the British central county of Norfolk was vandalized on Saturday, February 7, sending a shock wave among the Muslim community who vehemently condemned the Islamophobic attack.

“When I heard the glass being smashed I thought we were under attack,” Rashid, who was at the mosque during the attack, told EDP 24.

“It is not nice to feel scared in a place of peace.”

Norwich Ihsan mosque, in Chapelfield East, came under attack on Saturday at about 6:30am.

With 11 panes of mosque glass damaged, hundreds of dollars are needed to replace to glass and leading, according to the mosque board.

The attack, that comes almost a month after Paris attacks, has alarmed Norwich Muslim community who has been living in peace for decades.

According to Rashid, Saturdays’ attack was the first of its kind against Ihsan mosque.

“With what has been going on in the world lately I would not be surprised if it was a deliberate attack against us,” Rashid said.

Muslims in Europe have been facing an increasing resentment after Paris attacks that left 17 killed, including two Muslims.

The National Observatory Against Islamophobia said over one hundred incidents have been reported to the police since Charlie Hebdo attacks of January 7-9.

The rise in attacks over the last two weeks represents an increase of 110 percent over the whole of January 2014, the organization said.

Moreover, a Muslim father was stabbed to death in his own home in southern France this week by a neighbor who claimed to be avenging Charlie Hebdo.

Another Eritrean immigrant has been murdered in Germany’s Dresden.

Mosques in Sweden and Germany were also attacked following the attacks.

Many have condemned the attack, considering it “terrible”.

Another one wrote: “Mindless vandalism by louts, people need to realize and drop the hate you cannot blame a whole community for the actions of few.

“I have many friends at the Isher Mosque and have been there many times they are a peaceful community.”

On the other hand, that attack has fanned hate comments.

Other comments were more neutral. “When will people realize it’s not the Muslims that are the problem but the 0.1% of them that are extremists,” one wrote on Facebook.

Britain is home to a sizable Muslim minority of nearly 2.7 million.

A Financial Times opinion poll showed that Britain is the most suspicious nation about Muslims.

A poll of the Evening Standard found that a sizable section of London residents harbor negative opinions about Muslims.