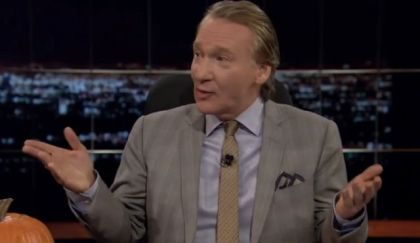 Of course one doesn’t expect hypocritical, lying Bill Maher to change his racist beliefs and insecurities about Arabs and Muslims over night; that’s part of the reason people watch him. Bill, like any slime ball politician knows his constituency and they love when he hates on Arabs and Muslims.

Still, it was quite something to see Bill Maher bizarrely defend the almost universally scorned (except by the Republicans) Israeli PM Benjamin Netanyahu.

I guess he just wanted to remind us, in case we forgot, that he loves himself some Israel.:

Politicians, Jewish advocacy groups, and Rabbis have been highly critical of methods used by Israeli prime minister Benjamin Netanyahu to win reelection last week, particularly his short-lived public renunciation of a two-state solution to the Palestinian crisis and his 11th-hour bid to bolster his supporters by warning that “Arab voters are coming in droves to the ballot boxes.” President Barack Obama said the remarks were “contrary to what is the best of Israel’s traditions,” the New York Times editorial board called them “desperate, and craven,” and Rabbi Rick Jacobs, president of the Union for Reform Judaism, noted the tactics were a “naked appeal to his hard-right bases’ fears rather than their hopes.” Several others, including Reform Rabbi Zinkow, said the prime minister’s comments “sound racist.”

But talk show host and self-professed liberal Bill Maher attempted to stifle the growing criticism of Netanyahu on Saturday night. Speaking to a panel that included a GOP strategist and a former Republican lawmaker, Maher challenged claims that the prime minister’s remarks were racist by, confusingly, pointing to America’s own history of using racist political tactics.

“I guess that is racist, in the strictest sense — he’s bringing race into the equation,” Maher said of Netanyahu’s remarks. “But, first of all, like Reagan didn’t win races with racism? Or Nixon? Or Bush? Like they didn’t play the race card? Reagan opened his campaign in Philadelphia, Mississippi, remember that? Remember Willie Horton?”

Maher’s second rant on the subject took an even more bizarre turn, with the host trying to add “a little perspective” by outlining a hypothetical scenario in which America is under siege from “black nations.” He also drew comparisons between Netanyahu’s election and America’s internment of Japanese people during World War II.

“I heard a lot of commentators here say, it would been as if Mitt Romney, in 2012, on the eve of the election said, ‘black voters are coming out in droves to the polls,’” he said. “But I don’t know if that’s really a great analogy. I think that would be a good analogy if America was a country that was surrounded by 12 or 13 completely black nations who had militarily attacked us many times, including as recently as last year. Would we let them vote? I don’t know. When we were attacked by the Japanese, we didn’t just not let them vote, we rounded them up and put them in camps.”

A video of the exchange is below.

Update: By the way, here’s what an apology that isn’t an apology looks like. Get ready for the laughs, provided for by Netanyahu.:

“I wasn’t trying to block anyone from voting. I was trying to mobilize my own forces,” Netanyahu said in an interview with NPR Friday. “And that mobilization was based on Arab money — sorry, on foreign money, a lot of foreign money that was coming in.”