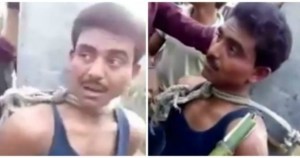 In France, it’s the politics of pork, in Sri Lanka and India it’s over meat in general.

Modi might have said that his Government would not allow any religious group belonging to a majority or a minority to incite hatred, but things in India are far from over. The ban on beef by the Maharashtra government has already kicked off a huge country-wide rage, this was made even worse when Haryana (another BJP ruled state) decided to follow suit. The latest twist into the ban of beef is the following video which has been going viral.

The video allegedly features a muslim cow trader who was trading cows for his hindu employer. It shows him tied to an electric pole and surrounded by a fundamentalist mob which is thrashing him and inciting him to utter Jai Shri Ram.