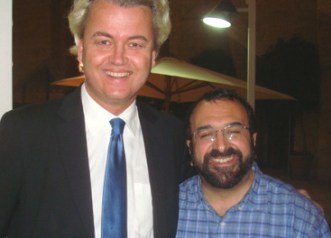 Geert Wilders is on his way to the US again, this time at the invitation of two US congressmen. He will also be awarding a prize at Pamela Geller and Deacon Robert Spencer’s “Draw Muhammad” contest in Texas. (h/t: WaltervanderCruijsen)

On Wednesday April 29th, he will speak at a reception offered to him by Congressman Louie Gohmert (R, TX).

That same day, he speaks at the invitation of Congressman Steve King (R, IA) at the breakfast meeting of members of the US Congress belonging to the renowned Conservative Opportunity Society, a group founded in 1984 by Newt Gingrich, former Speaker of the House of Representatives.

Wilders: “I feel deeply honored by the invitations. In my speeches I will warn my American colleagues of the dangers of Islamization.”

After his visit to Washington, Geert Wilders travels to Garland, Texas, where on May 3rd he will give a speech and award a prize of $10,000 for the best Muhammad cartoon.