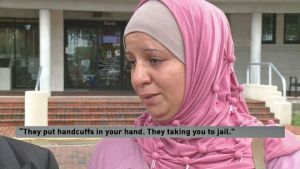 CAIR-Florida.org, BARTOW, Fla. – The Council on American-Islamic Relations Florida (CAIR Florida) has announced they will pursue a lawsuit for public accommodation discrimination and other legal claims against a Davenport Domino’s Pizza for the horrendous treatment of a Muslim customer on July 27, 2012.

Hakima Benaddi, a Florida woman who was wearing a Muslim head covering at the time, was accused by Domino’s Pizza management of threatening to blow up the location after she complained about the service and pizza she received. On July 27, 2012, a pregnant Benaddi went to Domino’s to order a veggie pizza with her 23-month-old daughter. When Benaddi opened her pizza box she discovered that it was grossly inadequate and returned to complain and seek a refund.

“I was surprised because what I got was nothing like my order,” Benaddi explained. “That pizza was barely suitable to feed to a dog.”

Prior to the incident, Benaddi was a regular customer at the location. There was one small difference, however, on the day of the incident Benaddi had recently started covering her hair by wearing the hijab, the Muslim head scarf.

The Domino’s Pizza did not assist Benaddi when she returned, they did not offer to make her a new pizza or offer her a refund. Instead, the cashier laughed at her and mocked her limited English proficiency.

Then, in what could only be described as a brazen discriminatory act, the Domino’s Pizza management called local police claiming that Benaddi had threatened to blow up the location resulting in Benaddi’s arrest.

Benaddi was in custody for over 24 hours before she was released. She was also forced to remove her headscarf before her booking image was taken.

CAIR Florida’s investigator revealed that eyewitness accounts were consistent with that of Benaddi’s and admitting that Benaddi never made any threats other than to file a complaint. The story the Domino’s Pizza’s manager provided to the police was completely, intentionally and maliciously fabricated.

Although the felony charge against Hakima was dropped before the arraignment, Domino’s Pizza has yet to confirm any wrongdoing.

“Without them acknowledging what they did wrong, this is our only opportunity for her voice to be heard,” said Thania Diaz Clevenger, Civil Rights Director of CAIR Florida. “We need to tell people that this is not okay, to let Domino’s Pizza know this is not okay, and to let other Muslim women who are targeted to know that they can stand up for themselves.”