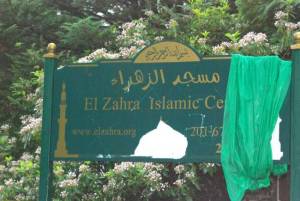 MIDLAND PARK — A Midland Park mosque where officials discovered a 10-inch swastika carved into an outdoor sign has stepped up security while authorities continue to investigate the vandalism, a report said.

“I am sure it’s one foolish individual,” Hasan Charaf, of the Elzahra Islamic Center, told CBS2. “It’s not what the whole town thinks.”

The mosque has now installed security cameras, the station reported.

The hateful symbol was discovered May 25 along with other sexually explicit images carved into a wooded sign outside the center.

The New Jersey chapter of the Council on American-Islamic Relations on Tuesday called for state and federal authorities to investigate the incident.

“These types of incidents should be investigated within the context of the rising level of Islamophobic sentiment in our society and treated with the seriousness they deserve,” CAIR-NJ Board Chair Nadia Kahf said in a statement. “Public officials and interfaith leaders should speak out against acts of hatred and intolerance whenever they occur.”

Kahf pointed to threats mailed to Arizona mosques and an anti-Islam rally where he said protesters displayed Nazi symbols.

Borough police have said the case was being treated as a bias crime and the investigation was continuing.

Chief Michael Powderley told CBS2 that investigators were exploring if the mosque carvings were connected to vandalism reported over the same weekend at the local high school.