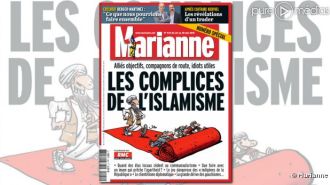 On the week of May 22nd, French weekly newspaper Marianne issued a sensationalist cover on “The accomplices of Islamists,” showing a red carpet being laid to the typical cliché of a dangerous Islamist (wearing a turban, qamis, and a beard).

The issue included 24 pages of articles on people and organizations who are accused of handing over the French republic to the “Islamists.” Included are a mix of profiles described either as accomplices (including a very scary account of an imam in Toulouse, radical political activists such as “Parti des indigènes de la république”), others branded as useful idiots (to quote Lenin’s characterization of social democrats), or cowards refusing to stand up to the Islamist danger (especially targeted are locally elected politicians who choose to accommodate demands coming from “Islamists”).

There is a lot that can be discussed about the issue (we will come to that later), but one article in particular resulted in Marianne receiving an unexpected and hilarious backlash especially on social media. Marianne attacked “Beur Fm,” a radio station dedicated to the “Beurs” (one of the ways North Africans are referred to in France), for its talk show “Les Zinformés.” Marianne accused it of providing audience to extremists, insulting Charlie Hebdo (calling them rats), inviting controversial figures such as “les indigènes de la république,” focusing too much on Israel-Palestine by inviting anti-Zionist figures and implying an analogy between the French joining the war in Syria and the ones joining the IDF when it committed bloodshed and atrocities in Gaza.

As soon as the article was published, a massive campaign ran on Twitter with the hashtag #PensecommeMarianne (think like Marianne), a few samples:

Translation: I cook a tajine does that make me an Islamist?

Translation: Marianne can’t be found this week at your newspaper stand but around here.

Translation: ISIS has just set the BeurFM flag in Palmyre…

Translation: BeurFM presenting its team for the upcoming season.

Translation: Djihad FM continues on BeurFM , join us for some fun this morning!!

Translation: Talk show host Yassine Belattar just arrived for his interview at France 5 and had some trouble parking his car.

Translation: The team of « les zinformés » going home after the show.

The response went viral, it was ranked fifth in France on Twitter. Following that, BeurFm decided to organize a special show called “Djihad FM,” branding themselves as a special show with a prize trip to Syria for the lucky winner.

The choice of mocking Marianne was very successful. The team also had a chance to respond back to Marianne by being invited to TV shows.

But some serious response still had to be done, and it came from media expert Julien Salingue, a regular guest of “Les zinformés,” also known for his sharp analysis on media (on a sidenote he also is an expert of the Palestine-Israel, he recently published a solid book on the Oslo process and its effect on the lives of Palestinians). Julien Salingue delivered a two piece deconstruction of the Marianne work, it can be found in French here and here. The main points of the criticism from Salingue are:

Marianne tried to respond to Julien Salingue’s analysis but mostly evaded the topic and showed the depth of its lack of credibility with orthographic (spelling) mistakes.

Following Salingue’s analysis, another article from another website was check and mate for Marianne as it simply analyzed several programs from “Les zinformés” and reached the following conclusion after listening to 12 hours of the show’s programs:

In brief, as Buzzfeed concluded, there are many opinionated debates held at « Les zinformés », one may agree with them or not but nothing to prove any complicity between BeurFM and any scary so-called “Islamists.”

Unfortunately, there seem to have been some threats against Marianne, which have to be condemned (as BeurFM did), but this media frenzy shows that humor and serious analysis work are a much better way of making points while fighting bigotry, sensationalism, or simply Islamophobia. A lesson worth remembering.