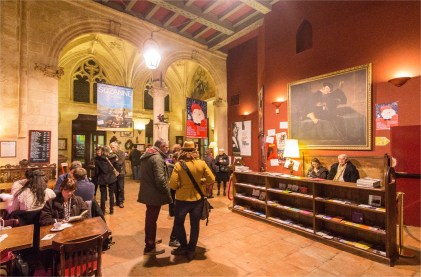 Europe has a lot of empty churches, many of which are “for sale” as the Wall Street Journal put it, due to the rising numbers of Europeans leaving Christianity in large numbers.

“…the closing of Europe’s churches reflects the rapid weakening of the (Christian) faith in Europe, a phenomenon that is painful to both worshipers and others who see religion as a unifying factor in a disparate society.”  By example, the Netherlands is projected to close 2/3 of its Roman Catholic churches in the next decade.

Pew Research Center data, presented by the Wall Street Journal, highlights the degree to which the European population reports no religious affiliation:  France (28%), Germany (24.7%), Italy (12.4%), Netherlands (42.1%), and the United Kingdom (21.3%).  By contrast, 16.4% of the United States population is unaffiliated with any religion. (via. Daily Kos)

It turns out across Europe these former Churches are being sold or turned into pubs, night clubs, skate halls and art galleries. I don’t know how prevalent it is for these empty churches in France to be changed but the one above is a church that was converted into a movie theater.

One French Muslim leader named Dalil Boubacker’s suggested turning some of them into mosques since there are a shortage of mosques compared to the demand. This didn’t go over well, especially with the Marine Le Pen’s and Nicolas Sarkozy’s (transparently attempting to appeal to the right’s votes) of the world. They demand that you “don’t touch our churches.”

Sarkozy added his name to a list of signatories that includes controversial writer and political journalist Éric Zemmour and philosopher Alain Finkielkraut, as well as Jeannette Bougrab, partner of the late Stéphane Charbonnier, Charlie Hebdo editor .

The petition, published in the magazine Valeurs Actuelles comes after Dalil Boubakeur, the rector of the Grand Mosque in Paris said he was in favour of turning empty churches into mosques due to the serious shortage of places of worship for Muslims.

In France there are currently 2,500 mosques, with another 300 under construction, but Boubakeur says the number falls far short of what is needed.

With upwards of 5 million Muslims in France – the largest Muslim population in Europe – Boubakeur and other imams suggest as many as 5,000 mosques are needed.

But his call stirred up a hornet’s nest and Sarkozy has come out firmly against the idea. So too has former French president Valéry Giscard d’Estaing.

“The French Catholic churches [have been] part of the historical heritage of the French population for ten centuries,” he said.

A poll published alongside the petition suggests they are not alone, with 67 per cent of French people apparently opposed to the idea.

“Even if France [has been] deeply de-Christianised since the 1960s, there is a real commitment… to the Christian roots and their symbols,” Jerome Fourquet, Ifop’s director of opinion and strategy, told the magazine.

My only point would be why not assign those historic churches that one seeks to preserve as national landmarks, clearly it is not possible that all or even most of these unused churches would fit this description. If some of them can be turned into movie theaters and used for other secular purposes there should be nothing wrong in some of them being mosques, synagogues, Buddhist temples, etc.