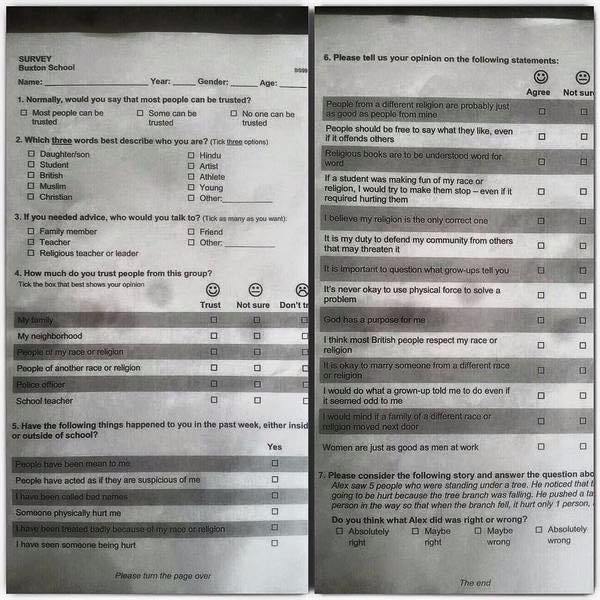 Over the past couple of days, this photograph of a questionnaire/survey given to primary school children in East London has been widely circulated on social media.

Statement from the executive head teacher of Buxton school, which is one in a number of schools involved in the pilot programme funded by the European Commission (source: Twitter)

It has been described as a ‘counter-extremism’ survey, consisting of undeniably loaded questions aimed at discerning the religious, ethical and even patriotic beliefs of the children taking part. Worse still, it is evident that this survey is undoubtedly intended for Muslim children primarily, who will continue to undergo interrogation of this kind as part of the new legal obligations upheld by educational institutions, consisting of monitoring potential ‘extremists’, as dictated by the Counter-Terrorism and Security Bill that recently passed in parliament. This survey, and its wider implications of state-sponsored violence and Islamophobia, are disturbing for a number of reasons, however, I want to first focus on what it means to categorise Muslim children as potential ‘extremists’.

To categorise children in such a way is a form of preconceived criminalisation. By categorising Muslim children as potential ‘extremists’, the government can justify violence enacted through laws that essentially treat them as criminals without having to provide any tangible evidence for doing so. In the CTS Bill, this criminalisation is determined by the exhibition of certain behaviours and values displayed by children that the government identify as ‘radical’. These so-called signifiers of ‘extremism’ amongst children appear to be based on symbols of religiousness and increased religiosity. If this is the case, is the government not conflating terrorism with Islam?