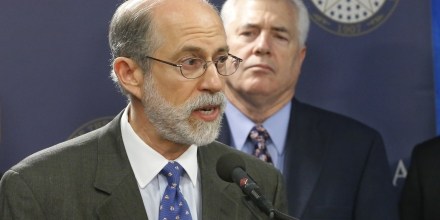 by Murtaza Hussain, The Intercept

This Saturday in New Hampshire, several leading Republican presidential candidates are scheduled to appear at a “National Security Action Summit,” hosted by the Center for Security Policy (CSP), a think tank led by notorious anti-Muslim conspiracist Frank Gaffney. Among the topics slated for discussion at the event are “shariah and the Global Jihad movement,” as well as border security and the “hollowing-out” of the U.S. military.

Among those listed on the event website as confirmed: Ted Cruz, Rick Santorum, Bobby Jindal, Carly Fiorina and George Pataki.

Donald Trump, Marco Rubio and Scott Walker are currently listed as “yet to confirm.”

Gaffney and the Center for Security Policy have a long and well-documented history of anti-Muslim conspiracy theories. In recent years, Gaffney has alleged that Muslims serving in the U.S. government are waging a “civilizational jihad” to undermine the country from within, famously accusing Hillary Clinton aide Huma Abedin of being a covert operative of the Muslim Brotherhood. In 2004, Gaffney leveled similar accusations of sedition against former DHS official and Republican political operative Faisal Gill, an individual later revealed to have been subsequently targeted for intensive government surveillance, as per documents revealed by NSA whistleblower Edward Snowden and reported by The Intercept.

Following Gaffney’s participation in controversial hearings on Muslim-American radicalization in 2011, Linda Sarsour of the National Network for Arab American Communities observed that “Inviting such pseudo-experts to articulate views about Muslim communities in New York is akin to inviting David Duke, or head of the KKK to discuss African-American affairs.”

Gaffney’s Muslim conspiracies have ventured into even more paranoid territory in recent years, with claims that the U.S. Missile Defence agency logo had been altered by the Obama administration, and now “appears ominously to reflect a morphing of the Islamic crescent and star with the Obama campaign logo.” Such unhinged allegations have now earned him a listing as anti-Muslim extremist by the Southern Poverty Law Center.