By Emperor on August 6, 2015 in Loon Violence, Loon at large 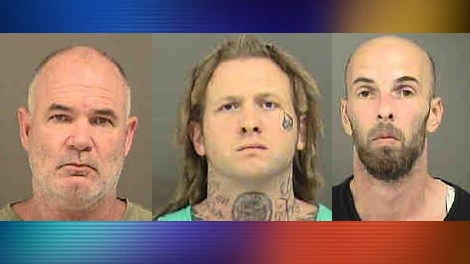 What if they were Muslim? Can anyone spot what these three have in common? Also, note that it doesn’t appear that an informant was necessary to entrap them into some anti-government plot.

Law enforcement were reportedly told the men were reconstructing live grenades from “dummy grenades” sold as military artifacts at stores.

Authorities believe the men were preparing for the possibility that the government intended to use armed forces to impose martial law, which they planned to resist.

Other defensive items were said to be purchased from stores, including a .338 caliber rifle, hand-held radios with throat microphones for communication, military issue Kevlar helmets, body armor vests and balaclavas (a form of cloth headgear designed to expose only parts of the face).

The three men are facing charges of conspiracy to violate laws governing firearms and explosives. Campbell was also charged with receiving, possessing and making firearms.

Domestic Terrorism, Double Standards, Islamophobia, Right-wing, What if they were Muslim, White Terrorism