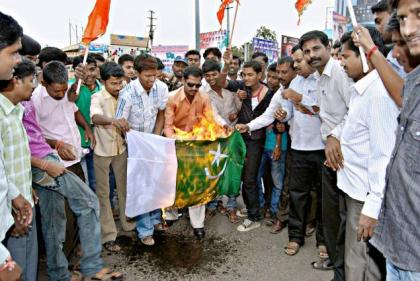 The flag was raised in Sindgi, near Bijapur, on 1 January, leading to angry protests by Hindu organisations and the stoning of a Muslim prayer hall.

Police say Sri Rama Sena was trying to create “communal disharmony” in an area with a sizeable Muslim presence.

Sri Rama Sena is a fringe group that claimed responsibility for attacking women outside a pub in the coastal district of Mangalore in 2009, saying that allowing females in pubs was against Indian culture.

Inspector general of police Charan Reddy told the BBC the situation in Sindgi was “now peaceful”.

“It seems they were out to create communal disharmony,” he said.

Hindu organisations had called for strikes in a number of towns around Bijapur to protest against the flag-raising.

But Mr Reddy said police investigations had led them to members of the Sri Rama Sena, a group founded by Pramod Muthalik after it broke away from the Bajrang Dal, an affiliate of the long-standing Hindu nationalist organisation, the Rashtriya Swayamsevak Sangh (RSS).