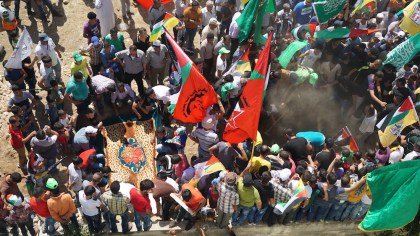 They threw molotovs into a sleeping family’s home. A baby, Ali Dawabshe was burned to death and now his father has succumbed to his injuries.

“The Israeli state and its vigilantes have killed 1 Palestinian child every 3 days for the past 13 years. They also detain them as adults, break their bones with stones, try them in military court, shoot them dead as they march w their school bags on their backs, bomb them in their homes with their families, and then criminalize them as terrorists.”

In another post Erakat provides readers with perspective regarding the impunity that Settlers operate under,

“This is not an outlier of bad Zionist settler apples- this is constitutive of settler-colonialism’s structural violence – Jewish supremacy is the corollary to Palestinian ethnic cleansing.

It is among the 11,000 settler attacks against Palestinian bodies and lands that have gone unpunished in the last decade. Impunity for these practices ensures their exponential rise- including 144% increase in violence from 2009-2011. This attack is in “revenge” for the demolition of 2 “illegal” buildings in the illegal settlement of Beit Il – because colonial subjects are not human and thus expendable.”

Hundreds of mourners from the northern West Bank poured into the hamlet of Duma to lay to rest a second Palestinian who had succumbed to wounds from a settler arson attack last week. Sa’ad Dawabshe, father of baby Ali Dawabshe who burned to death in the attack, died in the early morning hours in a hospital in southern Israel where he was being treated. His remains were transferred to his parents’ home outside of Nablus.

Seated in her courtyard around dozens of relatives, Dawabshe’s mother wept as she clutched a white tissue cloth. Her son’s body was ceremoniously displayed in front of her atop a low table draped in the Palestinian flag. Journalists clamored around her for photographs and interviews under the canopied patio. 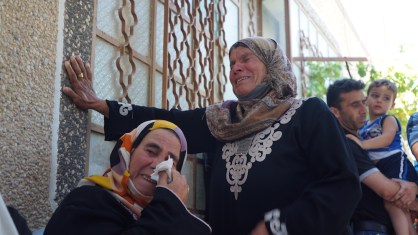 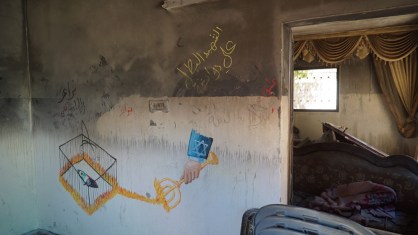 Amid the summer heat wave two relatives fainted while overcome with grief, causing a stir from aiding family members who themselves were also sobbing.

“Killing women, children, the elderly,” said Maitha Selman, 60, an aunt of Dawabshe who stood in the courtyard, “it is not allowed in monotheistic religions. It’s sinful.”

“They say we the Palestinian are terrorists, but no, they—the Israelis—are the terrorists,” Selman continued.

Dawabshe’s remains were then hoisted through the town to the village cemetery, followed by chants of “strike, strike Tel Aviv,” shouted by Palestinians who marched behind Dawabshe’s shrouded body, singing out a protest anthem that was popularized during the last two wars in Gaza.