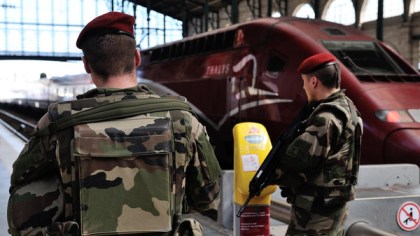 Is this a post-fact defense tactic to try and exculpate himself from the crime or was he really attempting to rob the train? What doesn’t make sense is why do you need an AK to rob a train and who just finds AK’s lying around in a park? Also we need to learn more about what actually went down on the train.

A gunman who attacked passengers on a high-speed train in France two days ago is “dumbfounded” at having been taken for an Islamist militant and says he only intended to rob people on board because he was hungry, his lawyer said on Sunday.

French and Spanish sources close to the case have identified him as a 26-year-old Moroccan named Ayoub el Khazzani who was known to European authorities as a suspected Islamist militant.

“(I saw) somebody who was very sick, somebody very weakened physically, as if he suffered from malnutrition, very, very thin and very haggard,” David told BFMTV.

“He is dumbfounded by the terrorist motives attributed to his action,” she added.

David said the man was barefoot and wore only a hospital shirt and boxer shorts for the police interrogation in Arras, northern France, where the train stopped after the incident.

The Moroccan told David he had found the Kalashnikov he had taken onto the train in a park near the Gare du Midi rail station in Brussels where he was in the habit of sleeping.

“A few days later he decided to get on a train that some other homeless people told him would be full of wealthy people travelling from Amsterdam to Paris and he hoped to feed himself by armed robbery,” David said.