The New York Times article about ISIS’ theology of sanctioning enslavement and rape, like the previous article by Graeme Wood in the Atlantic on the question of whether ISIS is “Islamic” or not created a lot of controversy and discussion.

The article has several serious issues that have been highlighted by commentators, Islamophobes predictably decided that they would use it as a boon to forward their narrative about Islam and Muslims. Take the queen bee of loony Islamophobia, Pamela Geller, she was up to her old shtick of lying and manipulating in an attempt to propagate not only her narrative on Islam but also a smug attempt at saying ‘Hey you libtard, dhimmis, I was right all along, see! Now you have the liberal paper of record saying what I said.’

However, like her Islamophobic comrades, she has to lie and twist in an attempt to achieve this point (see below). Not a surprise but the audacity of her chutzpah and how little she thinks of her :followers” is still striking. 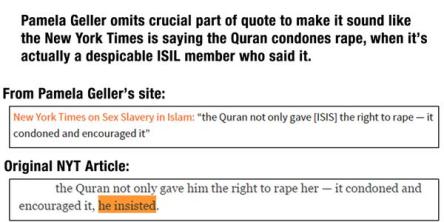