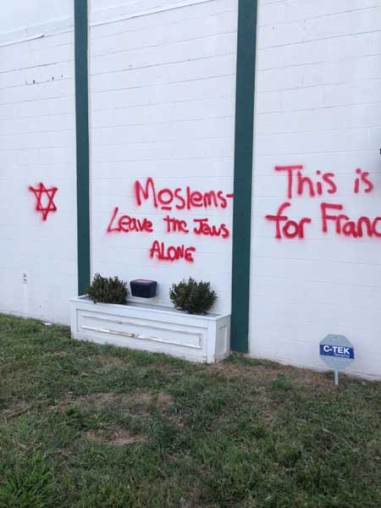 Apparently, someone decided they were going to do some hate vandalism “for the Jews.”

LOUISVILLE, KY (WAVE) – Red spray paint was used to write several anti-Islamic messages on the exterior of a building of worship.

The vandalism was discovered Wednesday afternoon at the Louisville Islamic Center, located in the 4000 block of River Road.

Curse words and a Star of David were among the graffiti sprayed all over the Islamic Center.

Despite the hateful messages, it didn’t take long for members of the Jewish community to come to Mosque. Those who were there were quick to back their brothers and sisters of the Muslim faith.

The mosque has been a place of worship for the Muslim community of Louisville for years. But this, this is the first time it has been the target of vandalism.