By Emperor on September 18, 2015 in Feature, Loon Politics, Loon Violence 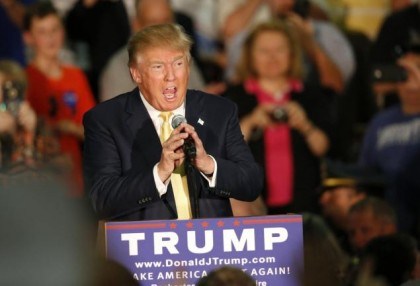 Was this insane questioner in the video below who asked, “when are we going to get rid of them [i.e.Muslims]?” at the New Hampshire, Donald Trump rally for real? He fills the whole genocidal, White racist, Islamophobic discourse so extraordinarily well — too well.

In any case, yes, Michael from White Plains is real. His mind has been infected by devils, and the devils names are: Robert Spencer, Pamela Geller and everyone else, including politicians, who give succor to rants about “training camps” and “stealth Jihad” in the little echo chamber of internet anti-Muslim hate.

Trump’s response was no surprise, typical of this slice of Americana we are witnessing, he replied to Michael by saying, “we’re going to be looking at that.” It’s his base after all that feeds the Trump ego-machine and of course he’s no stranger to expressing these sentiments himself.

Liberals also need to check themselves for a moment before they pat themselves on the back. The likes of Bill Maher and Sam Harris say the same sort of thing but couch it often in much more insidious language.

“We have a problem in this country. It’s called Muslims,” an unidentified man who spoke at a question-and-answer town hall event in Rochester, New Hampshire asked the mogul at a rally Thursday night. “You know our current president is one. You know he’s not even an American.”

A seemingly bewildered Trump interrupted the man, chuckling, “We need this question. This is the first question.”

“Anyway, we have training camps growing where they want to kill us,” the man, wearing a “Trump” T-shirt, continued. “That’s my question: When can we get rid of them?”