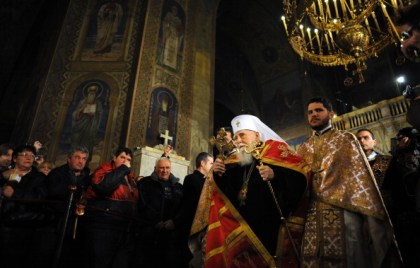 This exemplifies the issue with leaders in an institutionalized religion that is wedded to a certain narrative of xenophobic nationalism. It is not limited to the Orthodox Church but can be seen coming from the voices of far too many religio-political figures. Clearly, these people are out of touch with the original and deep teachings of their faiths.

Bulgaria’s Orthodox Church has called on its government not to let any more Muslim refugees into the country to prevent an “invasion”.

The Balkan EU member has largely been bypassed by the hundreds of thousands of refugees fleeing conflict and poverty, many of whom set off from Greece through neighbouring Macedonia and Serbia towards northern Europe.

But Bulgaria has still seen Syrians, Afghans and Iraqis cross its southeastern border from Turkey.

“We help refugees who have already arrived in our motherland, but the government must absolutely not let more refugees in,” the church, which claims 80 percent of the population as its followers, said late Friday on its website.

“This is a wave that looks like an invasion.”

It added that the problems in the refugees’ countries of origin “must be resolved by those who created them and the Bulgarian people must not pay the price by disappearing”.