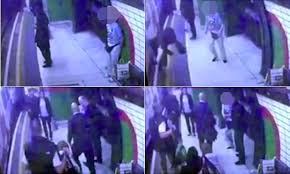 Why would this elderly, 81 year-old Shinohara do this? Has he been poisoned by the Islamophobic rhetoric in the UK? (h/t:J)

In the horrifying footage, a man is seen loitering on the platform of the station.

As the train approaches, he seems to rush towards her and push her into the side of the moving train.

She then collided with the side of the train before landing back on the platform.

The female victim suffered minor injuries and was treated for grazes to her face at hospital, the British Transport Police revealed.

Yoshiyuki Shinohara, 81, of no fixed abode, was arrested and charged on suspicion of attempted murder.