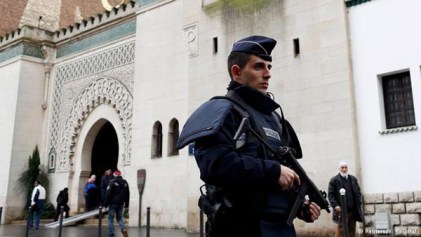 Is this the best response to the attacks in Paris? Shutting down mosques may satiate the appetite to be seen as “doing something” but is it really an effective strategy to combat “extremism” or does it only feed and perpetuate faulty narratives of a “war on Islam” and that mosques are breeding grounds for “radicalization?” What standard will the government of France use to declare something sufficiently “takfiri” or “radical?”

These questions and more are vital and need to be seriously engaged in a discussion on extremism, surveillance, civil and human rights.

After all, most of those who commit these acts aren’t known to frequent mosques, quite often they are religious novices. Radicalization doesn’t occur in the mosques: so how exactly is shutting these mosques down going to solve anything?

France is likely to close up to 160 mosques in the coming months as part of a nationwide police operation under the state of emergency which allows places of worship that promote radical views to be shut down, one of the country’s chief imams has said.

Following news that three mosques have already been closed since the November 13 attacks on the capital, Hassan El Alaoui, who is in charge of nominating regional and local Muslim imams and mediating between the imams and prison officials, told Al Jazeera on Wednesday that more were set to be shut.

“According to official figures and our discussions with the interior ministry, between 100 and 160 more mosques will be closed because they are run illegally without proper licenses, they preach hatred, or use takfiri speech,” he said.

Takfiris are classified as Muslims who accuse others of the same faith of apostasy, an act which has become a sectarian slur.

“This kind of speech shouldn’t even be allowed in Islamic countries, let alone secure countries like France,” El Alaoui, who became the first Muslim prison chaplain-general in 2005, said.

The recent mosque closures, he added, were made under “a legal act that the authorities have” and must have happened because “of some illegal things that they found”.

AMY GOODMAN: What about the effect of the mosques being raided on the Muslim community?

YASSER LOUATI (from Collective Against Islamophobia in France): Oh, an outrage and deep humiliation and complete abandonment by the government. The question was like, why? You know what’s going on in mosques. The Minister of Interior knows radicalization does not happen inside mosques and they just came here, they found nothing and started, like, pulling off ceilings. They smashed the libraries, threw books on the floor and just walked away. If it isn’t a sense of vengeance, you know, you are applying against Muslims, then what is it? Why not respect human dignity. I mean, like, you know, these Muslims are the very same target as you are people. Well you are not Muslims. Why hit them again by government forces that show no respect whatsoever? And when the pictures went viral on social media, the government said nothing about that.