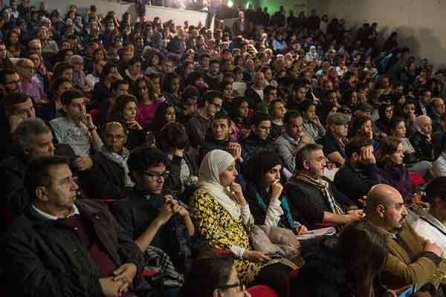 There are serious discussions regarding so-called “preventative” internment camps for those classed as “extremists” by the French state.

The number of people in this category doubled to 20,000—the majority of them Muslims—between August and November.

Chair Sihame Assbague called for putting slips of paper saying “no votes without justice” in ballot boxes instead of voting papers.

Campaigner Marwan Muhammad criticised much of the left, “who couldn’t be here because they found it more important to justify themselves to racists.”

Salma Yaqoob, a leading figure from the anti-war movement in Britain, pointed to what could be gained from cooperation between Muslims and the left.

Hanane Karimi is a campaigner in eastern France where the FN led the first round.

She told Socialist Worker, “A victory for the FN would be a catastrophe for everyone.

“But its ideas have been allowed to become so widespread that it becomes a possibility.

“Politics have lurched to the far right. The Socialist Party has been the best possible advert for the FN.

“In France there is no political alternative—and perhaps we need to build one.”

Read the rest of the article