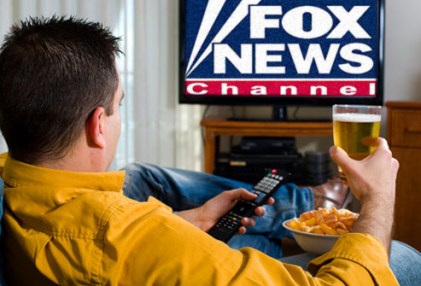 This just in! White Americans should be aware, drinking and watching Fox News is a toxic combination that may cause you to transform into a white supremacist terrorist seeking to perpetrate violence against minorities.

Take the recent example of John David Weissinger. Maybe he had a bit of hate in him, maybe he lost his job or his wife cheated on him. We’re told he suffers from anxiety and depression. He also enjoyed a brew or two or, well, lets say a lot more than two. Apparently, as his lawyer tells it, after binge watching Fox News for a week straight he decided to threaten the CAIR chapters in San Diego and Washington.

Malowney said Weissinger has problems with alcohol, anxiety and depression and had just finished watching a week of Fox News coverage on the Charlie Hebdo massacre in Paris when he threatened the CAIR offices.

“He barks when he’s drunk,” Malowney told the judge. “He was reeling from depression and anxiety.”

A female employee at CAIR’s Kearny Mesa office testified during a preliminary hearing last April that she came to work the morning of Jan. 15, 2015, and listened to a threatening voicemail left by Weissinger.

“In no way did we deserve the terror that Mr. Weissinger waged on us,” the employee, identified as Jane Doe, said in a recorded statement played in court Tuesday. “Domestic terrorism is unacceptable and must be stopped.”

This isn’t the first time a Fox News watcher has gone loony. Remember Randy Linn? He was the guy who said, “I only know what I hear on Fox News,” then one day drank 45 beers, and decided to burn down a mosque in Toledo, Ohio.

Prosecutors said Linn drove about two hours from his home to suburban Toledo on Sept. 30 and broke into the mosque where he poured gasoline on the rug and lit it on fire.

He estimated that he had drunk 45 beers over several hours before he decided to drive to Ohio.

Linn had several firearms in his car and carried a gun into the mosque, which was empty at the time.

The fanatical Islamophobic hate against CAIR has been going on for years and sadly it hasn’t only been the usual online suspects and celebrity Islamophobes. The hatemongers have included elected public officials who give succor to conspiracies about the group, as well as presidential candidates such as Ben Carson.