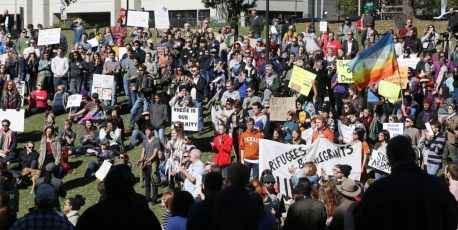 The Aqeedah (creed) of the Muslim is very near and dear to the believer.  Indeed it separates Islam from kufr (disbelief). Every Muslim is a takfiri in some sense of the word, for example no Muslim believes you can pray to a head of lettuce and refer to that as Islam.

Within Islam there are disagreements between scholars and different traditions and schools of Aqeedah and jurisprudence.  I studied Aqeedah with some of the best teachers America has seen. I will never claim to be the best Muslim or even a good Muslim. I’m very much a struggling Muslim and I always have been.  However, one thing I’ve always taken serious is my Aqeedah.  Even if I’ve flirted with different understandings and teachings I’ve basically always been on, and am on today, the Aqeedah I was taught by Sheikh Ali al-Timimi and the rest of my teachers.

Because of this I’ve been asked many times how can I as an activist be in the streets with and make common cause with atheists, agnostics, communists, druggies, thugs, LGBT activists and others.

For me it is a very simple matter.  Islam promotes justice and I stand with those calling for justice as long as what they call for is just and not in opposition to Islam.  Once they call for things that Islam is opposed to I no longer stand with them on those particular issues.

The same principle can be applied to electoral politics. Endorsing a Democrat or Republican candidate doesn’t mean you’re married to them and everything they stand for, voting isn’t a revolution.  It means you’ve looked at the totality of the candidates and you side with the one who is both the least harmful and has the greatest likelihood to do something good.

In America to participate in either movement politics or political party politics the Aqeedah of the Muslim can hold you back.  Meanwhile, if you take on a liberal, a conservative, or intersectional Aqeedah of non-Muslims, you can have a lot more success. This will get you more jobs, money and patronage. Unfortunately, many Muslims are making this choice. When the opportunity to advance politically arises and Muslim Aqeedah stands in the way it is the Aqeedah that goes away.

While many will see this as simply an example of weak Muslims selling out their religion to please non-Muslims it’s not that simple of a matter. There is a level of rationalization that goes along with this. The belief that yes I’m cutting some corners, and yes some of this may be dodgy from an Aqeedah standpoint, but I’m working towards the greater good.

In an age of Islamophobia Muslims are seeking allies.  There exists real enemies to Muslims and people in America who wish us harm. Therefore, it’s quite natural to grow close to those who are combating our foes and willing to be our allies. However, as my mentor Imam Mahdi Bray would say “politics is dating it isn’t marriage.” We can be allies without being one with our allies, we can stand with people in one area and not in another. We don’t have to completely take on the ideologies of our political friends and we shouldn’t be forced to sacrifice our Aqeedah for political game or more media access.

The dunya (world) is like an ocean during the time of the storm. The waters are difficult to navigate and at times it’s difficult to keep the ship afloat.  Our emaan (belief) guides us out of the rocky waters and once we get to port our Aqeedah is the anchor which will hold us steady. Take away our Aqeedah and we are just adrift at sea.

Umar Lee is an author and freelance writer from St. Louis now based out of Dallas. He may be contacted atUmarlee@gmail.com and found at Twitter @STLAbuBadu

The views expressed in this article are the author’s own and do not necessarily reflect Al Jazeera’s editorial policy.