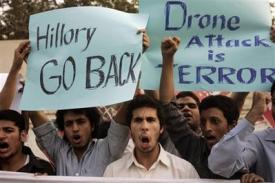 I don’t want to end up a “Bugsplat” – the ugly word that is used for what remains of a human being after being blown up by a Hellfire missile fired from a Predator drone. More importantly, I don’t want my family to become victims, or even to live with the droning engines overhead, knowing that at any moment they could be vaporized.

I am in England this week because I decided that if Westerners wanted to kill me without bothering to come to speak with me first, perhaps I should come to speak to them instead. I’ll tell my story so that you can judge for yourselves whether I am the kind of person you want to be murdered.

I am from Waziristan, the border area between Pakistan and Afghanistan. I am one of the leaders of the North Waziristan Peace Committee (NWPC), which is a body of local Maliks (or community leaders) that is devoted to trying to keep the peace in our region. We are sanctioned by the Pakistan government, and our main mission is to try to prevent violence between the local Taliban and the authorities.

In January 2010, I lent my vehicle to my nephew, Salimullah, to drive to Deegan for an oil change and to have one of the tires checked. Rumours had surfaced that drones were targeting particular vehicles, and tracking particular phone signals. The sky was clear and there were drones circling overhead.

As Salimullah conversed with the mechanic, a second vehicle pulled up next to mine. There were four men inside, just local chromite miners. A missile destroyed both vehicles, killed all four men, and seriously injured Salimullah, who spent the next 31 days in hospital.

Upon reflection, because the drones target the vehicles of people they want to kill in Waziristan, I was worried that they were aiming for me.