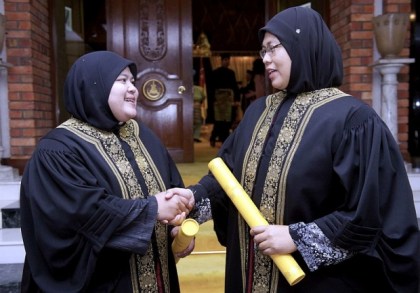 When most think of Shariah they have a simplistic understanding of it as a misogynistic law system that oppresses women and minorities. Little do they know of the egalitarian and compassionate spirit that is supposed to underpin its logic. It looks like in Malaysia strides are being made to resurrect that original ethos.

via. The Malay Mail Online

SHAH ALAM, June 27 — Two women judges from Selangor have been appointed to the Shariah High Court, a first in Malaysia, the Star Online reported

Noor Huda Roslan, 40, and Nenney Shuhaidah Shamsuddin, 41, received their appointment letters from the Sultan of Selangor Sultan Sharafuddin Idris Shah during a ceremony at the Istana Bukit Kayangan.

Dr Mohd Na’im added that the appointments had nothing to do with gender, and the two women were qualified for the job.

Seven other women were made Shariah Lower Court judges.