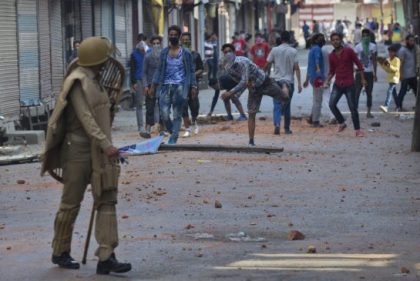 Not much coverage in the media regarding India’s brutal occupation of Kashmir. Kasmiris however have been on the streets daily, protesting the state violence that is an everyday fact of life.

Confrontations and pitched battles between protesters and Indian armed forces have continued in Indian-administered Kashmir, despite a round-the-clock curfew imposed by authorities.

Dozens of protesters were killed and hundreds wounded over the weekend after police and paramilitary troops opened fire on tens of thousands of Kashmiris who took to the streets to pay homage to the rebel leader Burhan Wani, who was killed on Friday. At least one police officer was also killed.

Wani was the leader of Hizb-ul Mujahideen, a group fighting Indian control of the disputed region. He has been widely credited for reviving armed resistance in Kashmir, using social media such as Facebook to reach out to young Kashmiri men.

K Rajendra Kumar, the director general of Jammu and Kashmir Police, told reporters that 100 police personnel had been wounded and that three went missing while quelling the protests.

Activists and separatist leaders criticised the security forces’ response to the protests, accusing them of using excessive force.