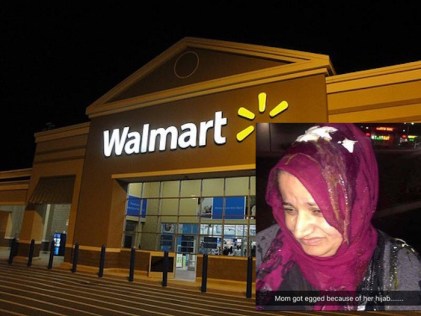 CALIFORNIA – A Muslim woman was allegedly egged because she wore a hijab as she was exiting a Walmart on Sunday in northern California.

Farad Afshar,  a student at Chabot Community College in Hayward, posted to Instagram that his mother was targeted by a group of men while leaving the store with his younger sister.

They had spotted her while she was shopping and stalked the mother and daughter as they exited.

The men smashed eggs onto the mother’s head and body, presumably because she was wearing hijab.

“My mom is the most kindhearted, loving, and selfless person you’ll ever meet. She has a great amount of pride and respect for her religion, culture, and customs. The fact that she can’t walk out of her home without feeling safe is sickening,” Afshar said on Instagram after posting a picture of his mother covered in eggs.

“I am at loss for words due to the immense amount of hate that is in this world. No one should have to see their mom broken because of a couple of people having disgusting prejudices about people that do not look like them.” he added.