By Garibaldi on July 15, 2016 in Feature, Loon Politics, Loon-at-large 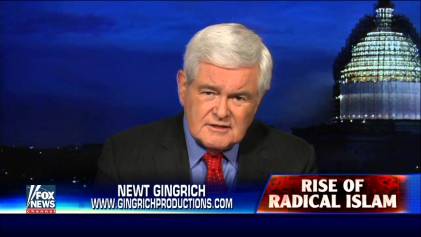 Newt Gingrich made headlines last week when he said something thought to be semi-non-racist, acknowledging that Black Americans essentially live under an iniquitous system in which they face greater discrimination and violence. The Washington Post quoted Gingrich saying:

“It is more dangerous to be black in America. It’s both more dangerous because of the crime, which is the Chicago story … But it is more dangerous in that [you are] substantially more likely to be in a situation where police don’t respect you and where you could easily get killed. And I think sometimes, for whites, it’s difficult to appreciate how real that is. It’s an everyday danger.”

He couched this in a context that Blacks aren’t “respected” because of their “crime” but he still was forced to acknowledge the obvious double standards and violence.

However, anyone who thought Newt might have evolved from his general Georgia-inflected White Supremacist beliefs was quickly disabused of that when yesterday he went on Fox News and called for Muslims who believe in Shariah to be deported.:

“Western civilization is in a war. We should frankly test every person here who is of a Muslim background and if they believe in sharia they should be deported,” Gingrich told Fox News’ Sean Hannity.

“Sharia is incompatible with western civilization. Modern Muslims who have given up sharia — glad to have them as citizens. Perfectly happy to have them next door,” he added. Further, he said: “Anybody who goes on a website favoring ISIS or al Qaeda or other terrorist groups, that should be a felony, and they should go to jail. Any organization which hosts such a website should be engaged in a felony. It should be closed down immediately.”

Gingrich also said that the attack in Nice is the “fault of Western elites who lack the guts to do what is right, to do what is necessary,” and suggested that mosques in America need to be monitored.