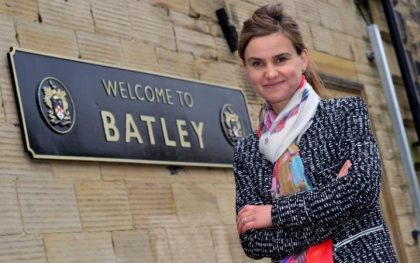 The far-right British National Party has posted leaflets to people living near the West Yorkshire town where Labour MP Jo Cox was killed, accusing her of taking “misguided action” by “helping Muslims”, the Commons has heard.

Labour’s Paula Sherriff said the “horrendous” leaflets, which had gone to her constituents in Dewsbury, said Mrs Cox was wrong to help people who may go on to join Islamic State, also known as Isis.

Mrs Cox was shot and stabbed in Birstall on June 16, a week before the EU referendum.

Former BNP member Jack Buckby is to contest the by-election in the Batley and Spen constituency Mrs Cox represented, despite commitments from the Conservatives, Liberal Democrats and Ukip not to field a candidate.

Home Office Minister Karen Bradley committed to meeting Ms Sherriff to discuss the “utterly unacceptable” leaflets and to look at what “specific action” can be taken against the BNP.

Reports of hate crime have soared by 57% in the wake of the Brexit vote, according to the National Police Chiefs Council.