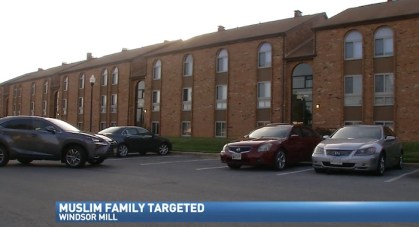 MARYLAND – A widowed Muslim mother and her two children are the targets of hates crimes in an apartment complex, after unknown culprits left hate-graffiti and then returned on another day and lit their home on fire.

The Council on American-Islamic Relations on Friday said the family was targeted in a series of incidents, and called for a thorough investigation.

Family members are offering a $1,000 reward for information leading to an arrest.

Cpl. John Wachter, a spokesman for county police, said someone entered the apartment in the unit block of Fallridge Court on Sept. 6 and set fire to something on the stove.

Wachter said “offensive writing on the wall” led police to classify the incident as a possible bias crime. It wasn’t reported what was exactly written, but it included reference to ISIS.

CAIR said the graffiti had been scrawled before the fire was set, during a series of break-ins that began Aug. 20.

After the Muslim woman contacted police on numerous occasions following a series of break-ins, they told her “there’s nothing we can do” and suggested she install security camera.  Her children are only ages 9 and 12.

They have since moved in with family in Bel Air because the woman was too afraid to stay at the apartment in Windsor Mill.

“She’s been pretty traumatized by this whole incident,” said Zainab Chaudry, Maryland outreach manager for CAIR., adding that the family believes the perpetrator is someone with access to the apartment .

Authorities also suspect that the culprits of the crime may be residents of the apartment complex, as someone would need to have a code to enter the building.