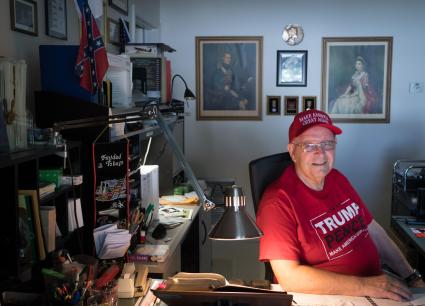 The Boston Globe has an intriguing story about how Islamophobic groups and individuals in Boca Raton are crusading against a local mosque being designated as a polling center for the upcoming November presidential elections. The response of some locals has been extremely bigoted, as many of them assert the usual conspiracy theories we have grown accustomed to and which Donald Trump has tapped into to rise to the top of the GOP.

via. The Boston Globe

Ted Seymour, 77, a local Republican committee member with a Trump bumper sticker on his Mazda SUV, frequently drives past the mosque. He chatted with Bassem Alhalabi and his wife at an interfaith event just outside of town, and they invited him to visit the Islamic center, but he has yet to find the time to stop in.

It’s not that he doesn’t like Muslims, he says, describing himself as a Christian missionary. He has befriended many Muslims during his travels to Dubai, Egypt, and Lebanon. He even speaks enough Arabic to stumble through greetings.

But Seymour says he believes rumors that the Islamic center has connections with extremism. So when he received word that the mosque would be his new polling site, he recoiled and immediately contacted the county’s GOP leaders.

“It’s an uncomfortable place to vote with all that’s going on,” said Seymour, a retired salesman. “Just common sense would tell you that with all the radical Islamic terrorism happening and the hatred of Jews, it doesn’t make sense to have a polling place at a mosque right in the middle of an Orthodox Jewish community.”

Other voters echoed similar sentiments in calls and e-mails to Boca Raton’s mayor, Susan Haynie, a Republican who ended up urging the county to find an alternative polling site — somewhere “more familiar to voters.’’

“They were mostly fear-based concerns,” Haynie told the Globe. “I’m not going to judge whether their concerns were founded, but any location that would have a negative impact on voter turnout should be rethought.”

It is not hard to find anti-Muslim activism in this part of Florida. Two hours north of Boca Raton, in Viera, a security guard stood posted at the entrance of a government building. Inside, as thunder boomed and lightning illuminated the night sky, Roger Gangitano kicked off a local chapter meeting of ACT for America, an organization that claims 1,000 chapters across the country and bills itself as the “NRA of national security.”

Before him sat more than 50 graying citizens, including about a dozen veterans. Also in attendance: a county commissioner and a candidate for City Council in a neighboring town. One man, a retired economist, wore a bright red Trump T-shirt beneath a tweed blazer.

The Gatlin Brothers played over the sound system. Gangitano playfully danced by the lectern, as members passed a collections basket around the room. Then he delivered the invocation.

“Dear God,” said the Long Island transplant, “teach us not to be judgmental.”

He proceeded to accuse “almost all Muslim organizations in America” of being front groups for the Muslim Brotherhood. Muslims, he said, are waging a “settlement jihad” in the United States.

“By 2020, they will probably be putting up a presidential candidate,” Gangitano warned.

A woman in the crowd gasped. “Oh God!” she said.

Gangitano seized on the Boca Raton mosque controversy to illustrate why its members must remain vigilant against the encroachment of Islam into American civic life and “defend our Democratic values.”

Tony Verzi, a longtime member seated in the front row, stood to update the group on refugee resettlement — “one of the best-kept secrets in American history.” He urged them “to be on the lookout” and attend county commissioner meetings to make sure Syrian refugees aren’t being let into the county.