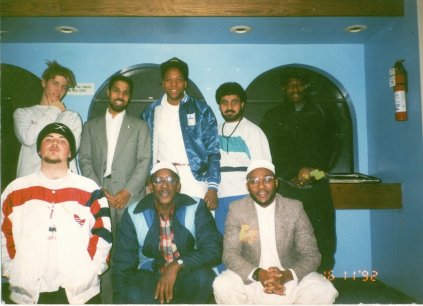 In 1992 I had just met a young enthusiastic convert to Islam named Randy Royer. In fact I was the first person he met when he walked into the masjid for the first time and I was a witness for his shahadah. Although the two of us both grew-up in St. Louis County our families, neighborhoods, schools, and path to both Islam and political activism was much different.

Randy grew-up in an artistic and educated family and I grew-up in a blue-collar Southern Baptist family. Randy lived in an upper middle-class neighborhood in West St. Louis County  (which I saw as fabulously wealthy at the time) and I lived in the working-class Ferguson-Florissant area.

We were both teenagers at the time and had both done poorly in high school. While we were poor students in school we were both bookish and had a love for learning and bonded over books and being the only two teenagers in a mosque mostly populated by men our parents age.

In 1992, just as in 2016, Washington University in St. Louis, hosted a presidential debate. Randy told me he would be protesting the debate along with a group of his punk rock buddies from West County and invited me to join. That would be the first of many political protests in my life.

I won’t bore you about the slightly amusing details of that day or our run-ins with supporters of President George H.W. Bush. Instead I want to use 1992 to talk about 2016.

1992 featured the fresh face of Democratic Nominee Bill Clinton playing saxophone on the Arsenio Hall show, answering questions about his underwear on MTV,  facing rumors about his womanizing, and answering veterans for his failure to serve in Vietnam. The race also featured H. Ross Perot who like Donald Trump was a billionaire political-outsider promising to run America like a business. Then you had the incumbent President Bush who had all the enthusiasm his son Jeb would display in 2016.

The election of 1992 seemed like a wild-ride at the time. Looking back it seems like a black and white movie or an old action film without modern film-making technology. Nothing in our past has prepared us for the pure crassness and lunacy of the candidacy of Donald Trump.

Randy would go on to be known as Ismail and would become a prominent Muslim activist living and working in Washington, DC. Working for CAIR, AMC, and MAS, Ismail helped win some major civil-rights victories for Muslims. However, it was his activism outside of DC that would lead my friend Ismail to trouble.

Watching the slaughter of Muslims in Bosnia on TV Ismail wasn’t satisfied to just write his Congressman or participate in marches. Ismail went to Bosnia and volunteered to fight with the mujahideen. Later he’d do the same in Kashmir.

Today Ismail is nearing the end of a 20 year prison sentence. Ismail, like a lot of other good and sincere Muslims, fell victim to overzealous federal prosecutions after 9/11.

I never went to Bosnia and Kashmir. Perhaps it was due to my blue-collar upbringing and a keen sense of knowing when something spells trouble or having enough adventure at home.

Ismail sought to help create a more perfect world. Pessimists like myself reject utopian ideologies knowing that you may be able to improve the world a little bit; but humanity is so flawed we will never come near perfection. That’s why I have no problem compromising and voting for a Hillary Clinton or a Chris Koster. Yeah, they’re not great, but people aren’t great and for the moment it’s the best we can do.

On the flip side of the coin you have other utopian believers. They want to Make America Great Again and they’ve placed all of their faith in Donald Trump.  In their utopian vision America peaked in the 1950’s and they want to bring it back. Like all utopian visions, from left to right (Jill Stein included), it can’t be achieved without massive destruction to actual humans.

I mentioned before that Ismail  (and me to be honest) found it too boring to write our congressman. Ismail’s congressman happened to be Richard Gephardt. A flawed congressman indeed with a shady racial past as a St. Louis Alderman. Congressman Gephardt, while we were busy talking about Bosnia, was helping to make St. Louis the biggest hub for Bosnian refugees in America. Today St. Louis is home to a thriving Bosnian community with minarets surrounded by malls.