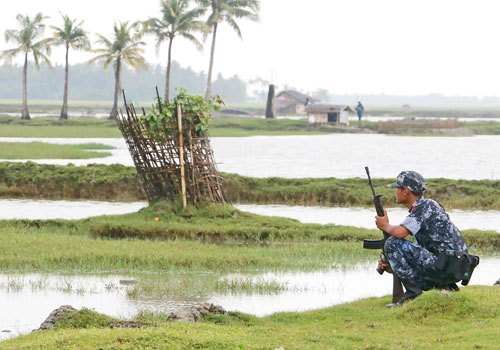 The Rohingya Muslims, a stateless minority who has faced systemic persecution including state-led violence at the hands of the Myanmar government and military authorities for decades are under siege once again. There has never been a meaningful militancy on the part of the Rohingya despite enduring what amounts to a genocide.

The narratives painting Rohingya and Muslims in Myanmar as terrorists, advanced by Buddhist nationalist extremists such as Wirathu may have received a boon through the current attacks on border outposts in the Western Rakhine state of Myanmar where a majority of Rohingya live. Videos that have not been authenticated show men speaking the Rohingya language and calling for “jihad” to liberate themselves from the oppression they face. It is unclear exactly what unfolded and who is responsible but the response by the Myanmar government has been excessive, already 26 Rohingya have been confirmed killed.

Whether, when its shape becomes clearer, it will be revealed to also include some aspects of international terrorism remains to be seen, but the new form of ethno-religious conflict now stalking Rakhine State is unlikely to be vanquished quickly or easily, or without further loss of life.

Those who are at pains to point out that the public at least do not yet know who committed the attacks on three border police stations in northern Rakhine on October 9 – killing nine officers, and allegedly shouting the name “Rohingya” – are correct.

But what we do know is this: Rakhine is witnessing the worst violence it has seen since the 2012 troubles and there are now videos circulating on social media which apparently show armed men calling for jihad in the name of the Rohingya cause – videos that are being reposted by, among other high-profile figures, former information minister U Ye Htut.

In response, the military has launched violent assaults on Rohingya communities around Maungdaw, purportedly targeted as attackers, but which rights groups have said are extra-judicial killings. Yesterday, helicopters were seen at Sittwe Airport. They were there, officials said, to evacuate teachers from Maungdaw, but were clearly armed with rocket launchers.

With conflicts in other parts of the country now proving ongoing military impunity for war crimes and human rights abuses, the potential for death and destruction in Rakhine is manifold.

This is the most-dreaded scenario, feared by all those engaged in finding, and hoping for, a solution to the ongoing humanitarian crisis in Rakhine. As of yesterday morning, a tally of state media reports indicated that 43 people – 30 alleged attackers and 13 security personnel – have been killed.

With senior authorities yet to divulge details or alleged affiliation of those accused of the attacks who have been capture alive, speculation has abounded.

Initial allegations by local government officials named the Rohingya Solidarity Organisation as being behind the incidents. The claim prompted widespread debate about whether such a group – last confirmed to have been active in the 1990s, but blamed by the government for a number of smaller-scale attacks on the border in the past two years – is still even in existence in any relation to its initial incarnation.

But the appearance of the two videos, which feature young men calling for jihad in the Rohingya language, has bolstered claims that there is at least some appetite for armed action among some minority Muslims, whatever name their group goes by.

Even if the current situation is brought under control quickly, these videos are not going to be forgotten by those who seek to stir nationalist aggression in this country – radical monk U Wirathu has inundated the internet with gleeful “told you so’s”. Nor can their implication be avoided by those who seek to uphold the rights of the vast majority of Rohingya who have remained peaceful despite suffering longstanding rights abuses.

A Rohingya representative speaking to The Myanmar Times yesterday rejected claims the attacks were drugs-related rather than representing some form of uprising. 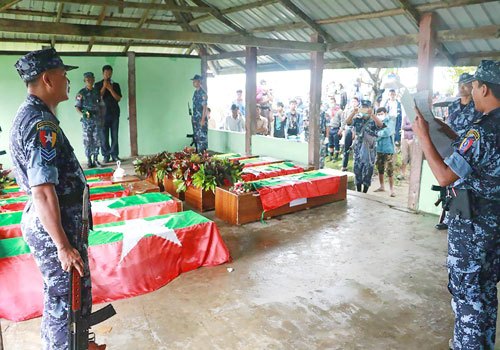 Nearly 7 million narcotics tablets, with an estimated street value of K14 billion (US$11.1 million), were seized during two raids in Maungdaw last month, leading some to speculate that the attacks on the police bases were some form of reprisal. However, the representative said that restrictions on movement meant large-scale involvement in, or serious profiteering from, the illegal trade would be difficult for people in Rohingya communities.

Abdul Rashid, a Rohingya rights campaigner, confirmed that those who appeared in the jihadist videos spoke the Rohingya language with a Rakhine (rather than Bangladeshi) accent. He added that one man “maybe studied” in Saudi Arabia as he was speaking Arabic, but the rest appeared to be local, based on their speech. None of his contacts in Maungdaw recognised any of those who appeared in the videos, he added.

“Most of them appear to be very young men or even boys. I don’t think they have leadership,” he said, rejecting the involvement of terrorists from other Eastern countries and describing it as a “small-scale” response arising out of “frustration” and deliberately fuelled by those seeking to destablise the current democratically elected government.

Nevertheless, this frustration – created by years of deliberate oppression – was something that needed to be addressed urgently, he said. He added that he had been warning the international community about such a threat and the possibility of such frustrations being used to further others’ agendas for a long time, but they had not taken his concerns seriously.