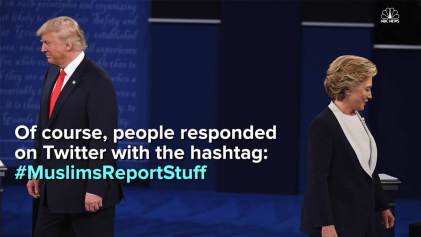 A flashback to a scene from the early years of America’s “War on Terror” and how the US put the Muslim American community under a national microscope, pressuring it to police it’s own communities. Back then some Muslim institutions reacted to the pressure by creating campaigns to prevent radicalization and terrorism. Today the US government is doing the same through programs such as Countering Violent Extremism (CVE).

The main talking point of a 2004 news conference by US Attorney General John Ashcroft was to tell the American public the not-so-earth-shattering news that “Alqaeda intends to attack the United States in the coming months.” Ashcroft shared photographs of seven people being sought in connection with terrorism investigations. CNN described another portion of Ashcroft’s address which focused on possible threats in these strange terms,

He also warned that terrorists may not have a typical look and that ‘the face of al Qaeda may be changing.’ Our intelligence confirms al Qaeda is seeking recruits who can portray themselves as Europeans,’ he said.” (emphasis mine)

The word “typical” in the CNN report is jarring, since it implies “terrorists” in general have a particular, predominant appearance, i.e. brown men with Middle East/Arab or Indo-Pakistani  features. This hearkens to the well-worn stereotypes discussed in works such as John Woods article “Imagining and Stereotyping Islam” and Edward Said’s book, “Covering Islam” among others.

America is being told, be on guard for anyone, it’s no longer safe to only be suspicious of the stereotypical brown looking terrorist, even your convert neighbor in suburbia could stealthily kill you. This of course means that converts to Islam are also under suspicion. This “diversified” representation of terrorists found its way onto TV dramas such as Sleeper Cell and more recently Homeland.

An important aspect to highlight from the Ashcroft news conference is that the seven who were described as “Wanted Alqaeda suspects at-large” were named by Khaled Shaikh Mohammed. Khaled Shaikh Mohammed, one of the professed planners behind 9/11 was extensively “waterboarded” (a torture technique) over 183 times in March 2003 (Terry, p.605). If the names of the seven were extracted under the duress of torture it adds an additional issue of the government using unreliable and tainted information to instill fear in the populace.

Tom Ridge, who was director of Homeland Security at the time stated that the “color-coded terror alert level” would not be raised. Later that year, for the only time, the terror alert level was raised, from yellow (elevated), to orange (high risk of terror attacks). The move was controversial as it was an election year and Democrats accused Republicans of raising the threat level for political reasons.

At the time, Tom Ridge towed the administration line and stated that the decision to raise the alert level had nothing to do with politics. However, in 2009 he revealed that he raised the alert level due to political pressure.

At the news conference the FBI director, Robert Mueller added that:

“We need the public, both in the United States and — I’ll emphasize — overseas to be on the lookout for these seven individuals. We want to know whether you’ve seen them in your communities, or that someone might be hiding them. If you have any idea where they might be, we need you to come forward.” (emphasis added) (CNN)

It was in this context and in response to these specific calls by the heads of government law enforcement agencies that MPAC decided to hold its own press conference announcing a national campaign to end terrorism.

MPAC was responding to a situation in which Muslim Americans were under intense scrutiny to prove they were loyal to the United States. Islamophobic narratives that are still common and widespread found ample breathing room in 2004. Maleiha Malek, quoting Field writes, “there has been an increased ‘tendency to criticize the inactivity of the Muslim population as a whole, and not just its leaders,’ arising from a belief that the ‘Muslim community had not done enough to prevent support in its midst.’” (Malik, Maleiha. Anti-Muslim Prejudice: Past and Present. London: Routledge, 2010. Print. p.146) 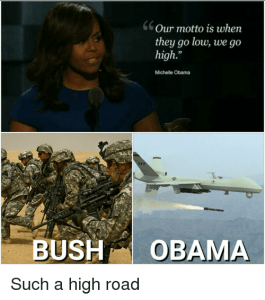 Fast-forwarding to today, when you analyze the track record of the Obama administration you see that he has continued and escalated the “War on Terror,” even if the language used to describe it has softened. Is it any wonder then that Homeland, a popular TV series, which plays on the simplified complex representation of Muslims, and the bifurcation of Muslims into the categories of either “good and bad” was at one time Obama’s favorite TV show?

The prevalence of Islamophobia, so fully on display during this presidential campaign season, is not simply a right-wing phenomenon. Obama administration-led initiatives, such as Countering Violent Extremism (CVE) are meant to co-opt Muslim communities and leaders into a program designed to sell war efforts while proclaiming to help Muslim Americans “fight radicalization.”

Arun Kundnani has shown that CVE is an outgrowth of the UK’s failed neo-con PREVENT program. It also has the contradictory effect of dangerously violating the ‘separation of religion and state,’ since the government is putting itself in the position of adjudicating what is “good, moderate Islam,” (Muslims uncritical or supportive of government policy) and “bad, radical Islam” (Muslims critical of government policies). (Spooked! How Not To Prevent Violent Extremism)

Relief from viewing the Muslim community and Islam through a politicized discourse revolving around ‘securitization’ will not be found in a Hillary Clinton presidency. Barack Obama’s presidency is going to be considered a honeymoon for Muslim Americans when hawkish Hillary takes over.

As indicated by troubling statements/positions by Bill Clinton and Hillary herself, Muslim Americans are accepted into the fabric of society on the condition that they offer their bodies and lives on the “frontlines” of the greater project to sustain American imperialism abroad and social control at home by policing their own communities.